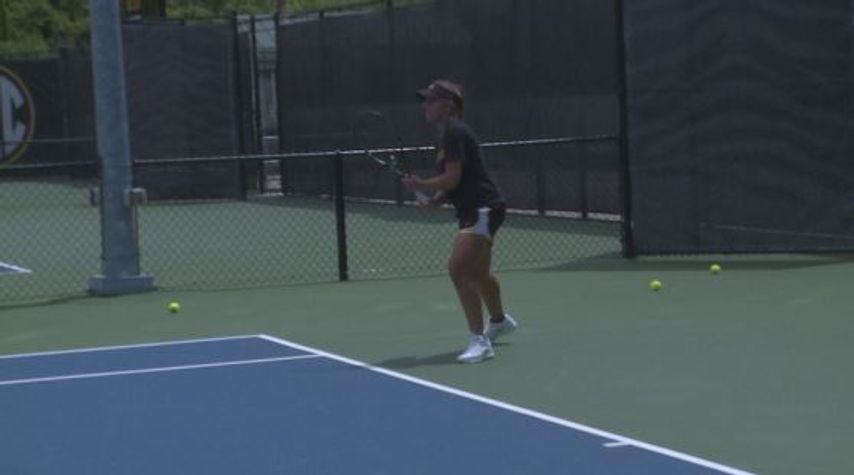 COLUMBIA- Junior Bea Santos was recently selected to represent the University of Missouri in the NCAA singles tournament, the first Tiger to be picked in more than a decade.

But she'll be representing more than just the Tigers. She'll have the expectations of an entire country on her shoulders.

Santos is a native of Lisbon, Portugal, and said the transition to America was hard at first, but tennis helped make it easier.

"It was definitely hard at first, just living away from my family it was the first time I ever did something like that so it was different from the things I'm used to but once I got used to it, it was fun to get to know a different culture and make new friends over here and make this my second home," Santos said.

With this being Santos second year playing for Mizzou, she contributed to the team's success this season with an overall best team record in over 10 years.

Before being selected to play in the championship, Santos was named to Second-Team All-SEC with a record of 21-16 in singles.

"I see it as an opportunity to do great things for Mizzou and to just be there will be an awesome experience," Santos said. "To see the best players in the nation, men and women it'll be really fun and I'm just excited for Mizzou."

Sasha Schmid, the women's head coach, said she watched Bea's confidence in her game improve as the season progressed.

"She works hard every single day, and she's obviously been very very talented from the very beginning," Schmid said.

Santos said she's had the support of her team and the coaching staff supporting her throughout her journey to the tournament.

"They were really super super excited for me, its been nice, they come out here and help me practice and take turns," Bea said. "They kind of coordinate between themselves like who comes which day, they've been awesome."

She said she is not worried about the competition and is looking forward to the tournament.

The singles competition is set to begin May 25 in Tulsa, Oklahoma.