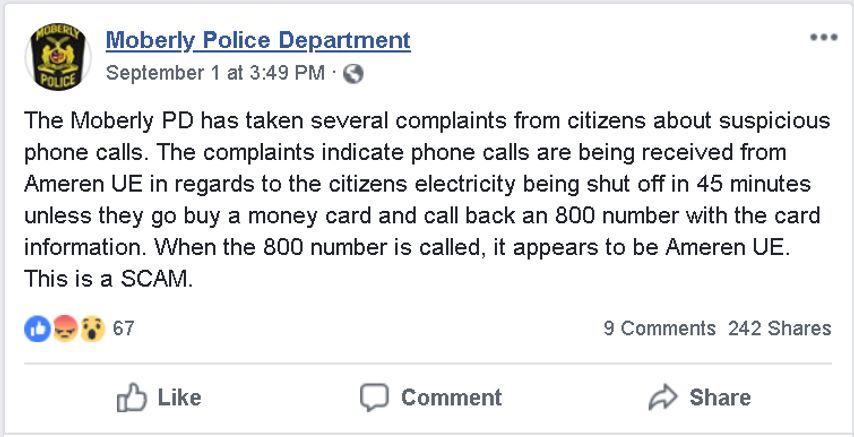 MOBERLY – Scammers targeted Moberly residents over the weekend claiming to be with Ameren utilities.

Saturday, the Moberly Police Department posted on Facebook, warning about the call.

The callers told people they had 45 minutes to make a payment by money card, otherwise, their electricity would be disconnected.

Ameren Missouri said, in an email, customers should never use a prepaid card to avoid having their electricity shut off.

“Legitimate utility companies do not specify how customers should make a bill payment and always offer a variety of ways to pay a bill. Ameren customers can make payments online, by phone, electronic check, mail or at pay in person locations,” the company said.

“If it’s truly Ameren UE, they give you notices. They don’t just call you up on a Saturday and say 'We’re going to shut you off,'” he said.

Link said Ameren will only call customers if the customer is expecting the call. For example, he said, when Ameren calls to schedule a service the customer requested.

“If they contact you and you haven’t contacted them, then it is probably up to no good. Disconnect the call. Give them no information over the phone, the internet of any kind,” he said.

Ameren Missouri said, in an email, customers should never give their personal information over the phone. It also said scammers may target businesses more often than individuals.

“Scammers are likely focusing their efforts on businesses because they yield much higher dollar amounts than individual residential customers,” the email stated.

One Moberly business owner, who preferred to not speak on camera, said he got a call from someone claiming to be with Ameren on Saturday. He said the caller asked him to go to the nearest Dollar General store and buy Green Dot cards to make his late payment of nearly $996.

He said the caller did not address him as an individual, but only as his business’ name.

Link said this is not the first time Moberly has been targeted by scammers.

“They’re dialing hundreds of numbers and hoping someone picks up that will talk to them and they could somehow convince that this is valid and you should send me money,” Link said.

The business owner said the caller spent nearly 10 minutes trying to convince him the caller was associated with Ameren.

Link said scammers are usually in other countries. He said, if someone were to give them money, there is not much the police can do to help, but they will take the report.

Ameren Missouri asks customers to call if they suspect someone is impersonating an Ameren employee: 1-800-552-7583.