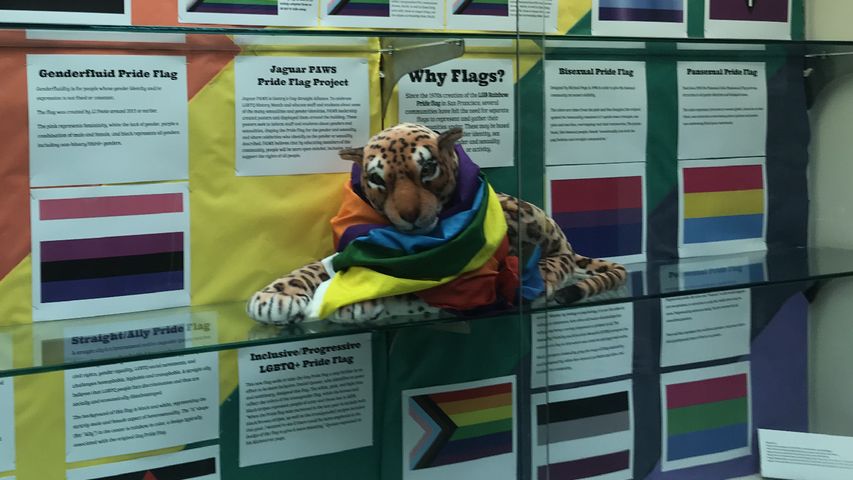 Facebook user Thomas Fenner is an alum of Gentry Middle School and supports the school's actions.

"Homosexuals are looked over and when society starts to show acceptance, we have closed minded people who accuse us of forcing it on other people," Fenner told KOMU 8 News via Facebook. "The LGBT youth need to see that they aren't alone."

Jay Atkins is a parent of Gentry students who raised concerns about this issue with Columbia Public Schools Superintendent Peter Stiepleman. He claims Stiepleman handled the situation accordingly.

"I am satisfied with his receptiveness to my perspective," Atkins said. "I believe further comment on this subject at this time would be counter productive."

Dr. Fairouz Bishara, principal at Gentry Middle School, sent an email addressing the issue to all Gentry parents. "The display is part of our school's celebration of LGBT History Month," the email said. "Our diversity committee, which is led by teachers, chooses a topic every month to highlight with our students, teachers and community."

Bishara also wrote in the post, "By choosing LGBT History Month, our goal as a school is to bring knowledge, empathy and compassion to a community that is represented at all levels of our school system...it is not our intention, by any means, to advocate for any type of sexual orientation nor to encourage sexual activity, but to promote compassion and empathy for others."

However, the posters will soon be taken down.

"We will be removing the most recent poster series that caused concern among some parents," the statement said.

KOMU 8 News reached out to both MU Law and Columbia Public Schools. MU Law could not find any sources available for comment, while CPS could not be reached for comment.