SCHOOL'S OUT: CPS's last day of school is a little different this year 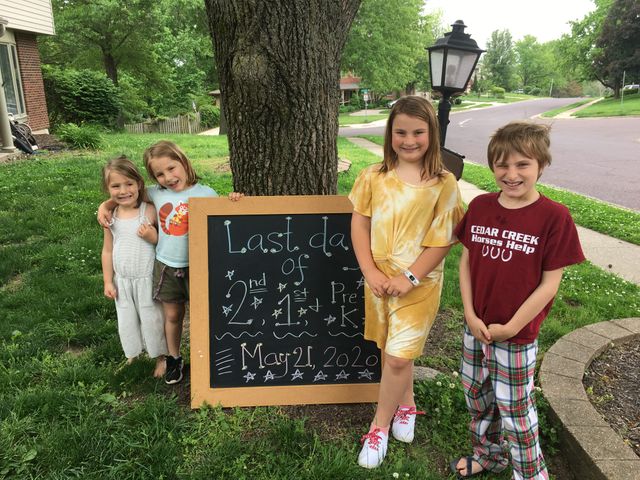 COLUMBIA – The last day of school usually ends with a pep rally and signing of yearbooks for Columbia Public School students.

But this year, CPS spokeswoman Michelle Baumstark said most schools in the district were working as drive-thrus on Thursday for students to drop off school supplies or pick up left-behind belongings.

“Having today be the last day of school, it just really feels kind of anti-climatic,” mom Molly Myers said.

She said three of her four kids go to Beulah Ralph Elementary School – her oldest son, Will, is in 2nd grade and her 7-year-old twin daughters, Layla and Suzi, are in 1st grade. She also has a four-year-old daughter, Sadie.

Myers said it almost feels like summer started early, “since we’ve all been home together the last two months."

March 17 marked the last day of in-person classes for Myers’s three school-aged children. When the district first made the announcement, families hoped to be back into the classroom before the school year ended.

“I think that three week window gave [my kids] a little bit of hope,” Myers said.

However, on April 9, Governor Mike Parson required schools to stay closed for the rest of the academic year.

“I think hearing the news that ‘this is how the school year ends…’ it was hard,” Myers said.

In a statement to KOMU 8, Baumstark said, "It has been anything but usual for us all. While things did not go as we all planned, we are proud of our students and their accomplishments this year."

But Myers said she made sure her kids knew today was special.

“We made a little sign that’s in our yard today,” she said.

She said they took last day of school pictures both with, and without, masks.

“Our school has continued doing morning announcements through this whole thing,” Myers said. “So, we were able to watch the final day’s announcements on the computer together.”

She said she knows it is confusing for her kids but hopes they were able to get some closure on Thursday.

“I think it’s kind of a grief cycle,” Myers said.