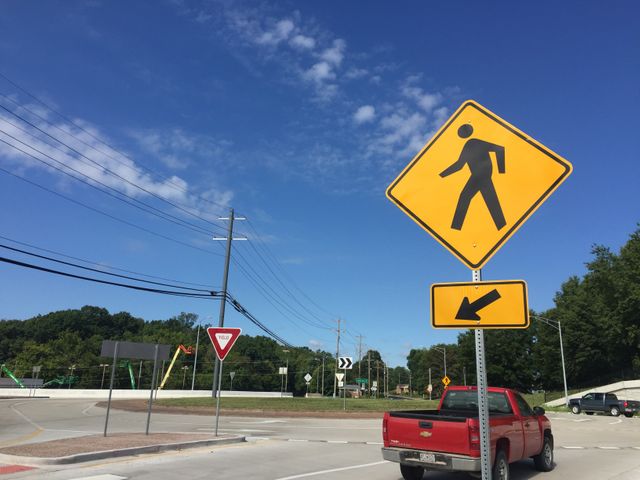 The intersection of Jefferson Street and Stadium Blvd. had problems with heavy traffic for a long time, according to Jefferson City Engineer David Bange. The new roundabout is the eighth completed in the city, but is the first to include two lanes.

Three schools surround the roundabout, including Helias, Trinity Lutheran School and Jefferson City High School. Bange said the previous light could not handle the traffic flow from the schools in the morning.

“I think anyone who had driven through the Stadium and Jefferson intersection before at 7:30 in the morning can attest to how well it is handling the traffic now,” Bange said.

According to the Jefferson City Police Department, there had only been six minor accidents at the intersection in the past two years prior to construction on the roundabout. However, Bange said the backup on the highway from the intersection was the major safety concern.

“If you look at the accidents near Stadium, nothing terribly severe. But you would see at the signal a lot of rear ending accidents and angle accidents. Roundabouts are in the neighborhood of 80 percent safer than a traditional signal light intersections, because generally folks are going slower,” Bange said.

Some nearby residents said they have mixed feelings about the new roundabouts, while others said it has tremendously eased their commutes.

Anne Day, a Callaway County school bus driver, drives the same route every day to pick up students from a nearby career center. She said the new roundabout shaved a few minutes off her drive, and the lanes offer plenty of room for wide turns.

“It’s easy. You just pull up and you don’t have to wait for a stop sign and lights. I have been driving on this new roundabout for two weeks now and have not seen any issues,” Day said.

Andrew Hayden, a junior at Lincoln University, said it has helped his commute go smoother, especially when he takes his brother to Jefferson City High School in the morning.

“When the light was here and it came closer the 8 in the morning the light was so busy. We probably spent sometimes 10 minutes at the light. And now you go right through; it so much easier,” Hayden said.

Trinity Lutheran Church is located directly off the second leg of the roundabout. The Senior Pastor, Russ Bowder, said he is not a fan of the new roundabout.

“We can’t get in or out of our school entrance with the same safety as before when there was a stop light. Before you could look left and right and make turns appropriately. Now, it’s just traffic; nothing to slow them down,” said Bowder.

He said he agreed there was heavy backup near the schools and Highway 54, but does not think the roundabout is as safe.

“There are some folks that are a little bit hesitant of the roundabout perhaps that is just because it is unfamiliar,” Bange said.

Bange said he has visited the roundabout several times since it was completed. He said most people seemed just fine maneuvering the new intersection.

“It works more even in the slow times. You know with a traffic signal, even if there is only one car at the intersection and you happen to get there when its red you’re going to sit there through that traffic cycle. With a roundabout, you would look, see no one in the intersection and just keep on going,” said Bange.