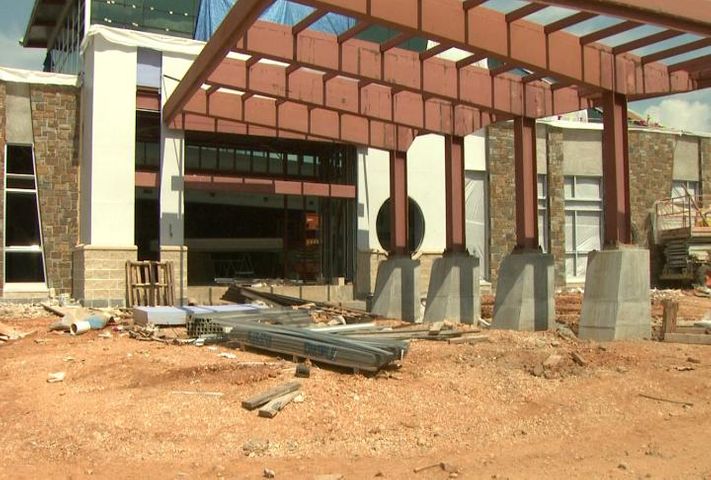 The schools will have FEMA-authorized safe rooms designed to withstand the winds of an EF-5 tornado, but they will look like gymnasiums or classrooms. Mike Johnson, Joplin Schools' Director of Construction, said the double use of the rooms is supposed to make riding out a tornado a little easier.

"We've had traumatized kids. Many of them rode out these tornadoes," Johnson said. "Well, this is a happy place. This is where they come for P.E., play basketball. While they're here, they can shoot hoops. We'll have a flat screen TV that we'll have available that we can show movies."

Irving Elementary, which is expected to open after winter break, will have two safe rooms. One will be the school gymnasium on a daily basis but will double as a community safe room. It will be open anytime there is a tornado watch or warning.

"In the event of a tornado watch, the doors will electronically release, a beacon light will go on over the sign that says community tornado shelter to let people know we're open for business," Johnson said.

Johnson said FEMA regulations state that anyone who lives within a five-minute walk of Irving can come to the safe room. In the event of a tornado, an official will be on hand to direct crowds into the space. There will also be peep holes in the doors so officials can make sure it is a person knocking rather than debris.

Johnson said crews at an off-site location specially constructed the walls and ceilings to meet FEMA regulations. Then, they transported the pieces to the Irving site and built the structural parts of rooms in about a week. Turning those safe rooms into a gym and classroom will several months.

The other safe room at Irving will be a special education room for daily use, but it will double as the safe room for faculty, staff and possibly students. That room has special tornado-resistant windows with inch-thick glass and heavily bolted in frames.

Johnson said the tornado-resistant construction is important, but how it will hopefully make the kids feel is equally as valuable.

"We're hoping it will have a positive emotional effect on the kids when they're going to be terrified when the sirens go off," Johnson said.

Johnson plans for Irving Elementary to be complete by December, and the other 13 safe rooms around town to be ready by the spring 2014 tornado season.