SEC Network makes stop at Mizzou ahead of SEC opener 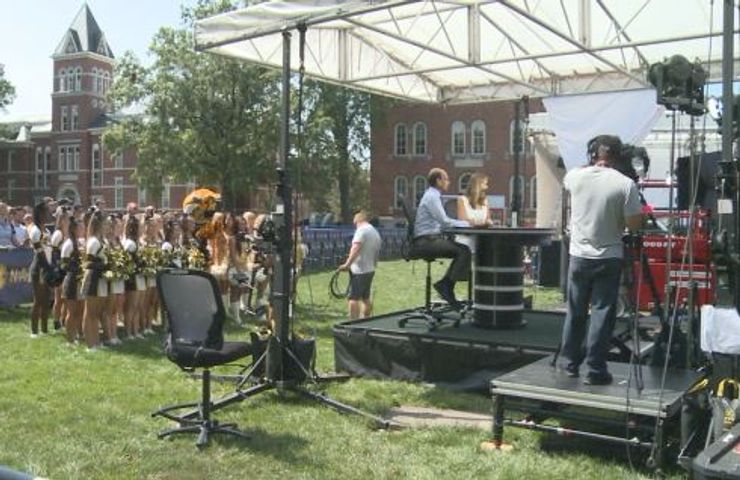 COLUMBIA - The Mizzou campus will look a little different ahead of the Tigers' first SEC game of the season.

SEC Network started setting up on Friday for its Saturday preview show, which will air live from Francis Quadrangle.

Students stopped and took pictures of the tour bus and got a few selfies with the anchors.

Evan Bolts, an MU student, said he was excited for the show and for the game.

"I know there are going to be a ton of people and it's causing a ton of buzz," Bolts said. "I know South Carolina travels well and I'm looking forward to the atmosphere."

Bolts admitted he got starstruck when he waved at network personality Paul Finebaum.

In between taking selfies with students and prepping for showtime, host Laura Rutledge talked with KOMU about what fans can expect Saturday and why she enjoys coming to MU.

"We are here because this is absolutely the best game in the SEC this week," Rutledge said. "This is going to be where it's at. We can't wait to document all the tailgating and traditions here at Missouri. It's a blast!"

Rutledge said fans can expect a lot of fun and a lot of noise Saturday between filming and gametime.

"We pride ourselves on bringing the fun and excitement to the fans, but the fans onsite are the biggest part of that. If you're from Missouri, you want to come out and make some noise, show the nation what you're all about here."

Rutledge added her favorite part of coming to Columbia is the atmosphere.

"I love the food here," Rutledge said. "I love the food, I love the downtown area. And there's so much rich history here at this school. It's one of the most unique places to go in the SEC."

With SEC Network in town, Bolts said he expects Saturday to be very busy.

"There's just going to be a ton of people everywhere," Bolts said. "It's going to be crowded but it's crazy. The fact the SEC home opener is here at Mizzou, I can't think of a better way to start the SEC season."

Kickoff is not until 6 p.m. Saturday, but SEC Network will be filming shows on Francis Quadrangle from 9 to 11 a.m. on gameday. Fans are encouraged to come to the Quad and cheer on Tigers football.