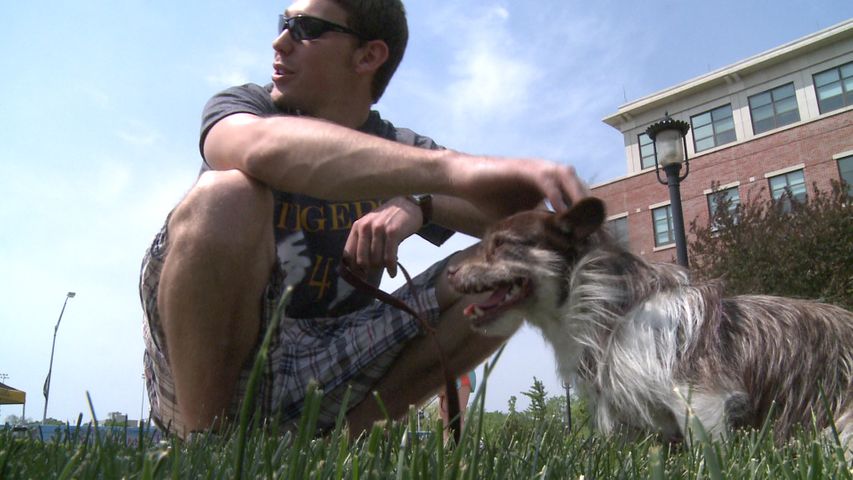 COLUMBIA - The University of Missouri's Tigers for Tigers organization hosted its second annual Doggie Play Day Tuesday at the Carnahan Quad. Student organization members planned the event to raise awareness of endangered tigers across the globe.

Tigers for Tigers teamed up with Columbia Second Chance which provided 15 dogs for the event. Students and community members donated $3 to visit with a dog and all earnings will be donated to tiger awareness projects.

The group's president, Jennifer Smith stressed the importance of endangered tiger awareness at the event.

"There's only about 3200 tigers left in the wild today so it's definitely pretty vital that we work to save them now before they're gone."

Some endangered tiger advocates say the animal will be gone in ten years. Smith also pointed out community members can make a difference by simply buying and using goods with out tiger parts in them. Smith noted many coffees today are made tiger free and other similarly made products can be identified by a small green frog sticker on labels in stores.

One Columbia Second Chance board member,Valerie Chaffin, says the event is not just helping tigers around the world.

"It shows the public that shelter dogs are not agressive, they're not mean and they're not unhealthy. They're healthy happy dogs that have been socialized and cared for by foster homes in the community."

Chaffin hopes the event will lead to dog adoptions.

The MU club has been around since 1999 and was the first organization in the nation of it's kind.  Part of the club's mission is to raise endangered tiger awareness and help ensure that as long as there are more than 60 colleges in the country with a tiger as its mascot, wild tigers will be alive as well.