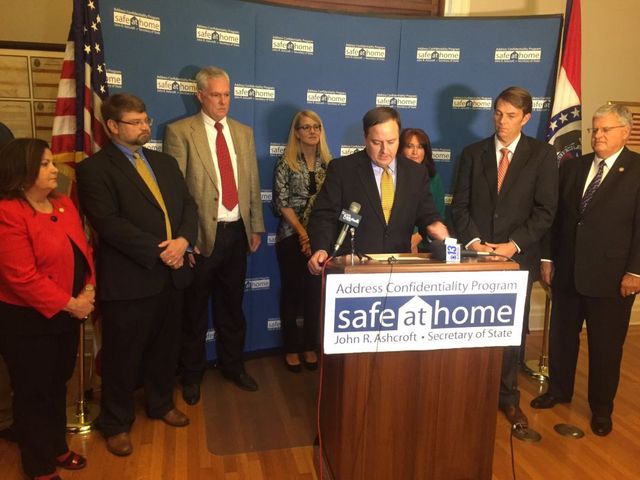 JEFFERSON CITY - Missouri Secretary of State Jay Ashcroft teamed up with Missouri Attorney General Josh Hawley and local legislators to fight against a St. Louis County circuit judge who they say challenged the integrity of the Safe at Home Address Confidentiality Program.

The program's goal is to keep the addresses of survivors of domestic violence, assault and abuse confidential by giving them substitute addresses and a mail-forwarding service.

In January, St. Louis County Circuit Judge Sandra Farragut-Hemphill filed a court order requiring a woman to reveal her address as a part of a divorce case, despite the fact that she was a participant in the program.

According to a release from Attorney General Josh Hawley's office, he filed an emergency motion to intervene on the case in defense of the program.

"It protects Missourians across the state whose safety is threatened by violence," Hawley said in the release. "Every victim of domestic abuse should be able to keep her identity safe and we will fight to ensure she can."

Ashcroft held a press conference Wednesday to denounce what he calls a refusal on the circuit court's part to hear the motion.

"I will do everything I can to protect this victim and all the other victims of abuse through the Safe at Home program," Ashcroft said.

The circuit court judge cited a flaw with the program application process when defending her decision.

Because of it, the roughly 1,500 people in the program received letters asking for them to reapply to the program last week.

Ashcroft said the program is about a lot more than this individual case.

"This is incredibly important to me. This is a service we provide to protect some of the most at-risk, most vulnerable citizens of our state," Ashcroft said. "If any of my family were at risk or in any danger like this, I would do anything I could do to help them."

"Many times, it is the difference between life and death for these mostly women," Herrera said. "Once the abuser knows the address of the victim, they can go ahead and commit a crime or really threaten the lives and the safety of the women."

Herrera said the case, as well changes in Missouri gun laws, have created greater concern about how the state protects survivors of domestic violence.

She said it gives her hope that Ashcroft and Hawley are looking to strengthen the Safe at Home program.