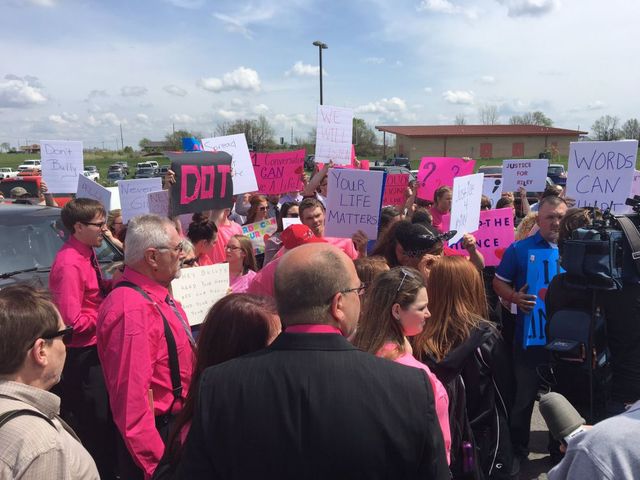 SEDALIA - Community members held an emotional protest outside Smith-Cotton High School Thursday, asking the school to step up when it comes to preventing bullying, after yet another student took her life Saturday.
Tensions ran high between the school administrators and angry students and parents asking for answers.
The protest came less than a week after 16-year-old Riley Garrigus took her own life. Riley's death raises the number of student suicides in the school to three in less than 16 months.
According to parents and students, bullying is a huge issue at the school, and is a major factor in why those students took their lives.
Former Smith-Cotton student Kelli Britton said Riley was like a little sister to her, and she couldn't believe how the girl was treated.
"I have no words for what people have done to her," Britton said. "We want to make sure in our community this is the last, after the first it should have been controlled, there shouldn't have been a first."

"We have to do more training. We've got to get more support things in schools, and at a younger age," Garrigus said. "It has to start in grade schools it really does."

School district officials told protesters bullying is an issue in a lot of places, and Sedalia is no different.

The superintendent of Sedalia School District 200, Brad Pillott, said the core problem is what happens outside the classroom.

"When it comes to bullying, I think most situations start with social media, after 5, before school and on weekends," Pillott said. "The school district works on those issues during the week so it becomes our problem. That doesn't mean it doesn't happen at school, I believe all schools have problems with that."