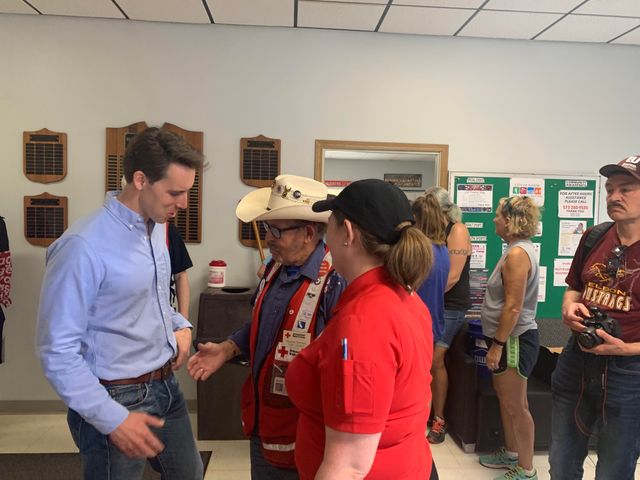 Hawley began with a briefing with first responders at the Eldon Fire Department. He visited the Red Cross shelter at the Eldon Community Center.

He also toured some of the most heavily damaged areas of Jefferson City before meeting with first responders and law enforcement officials there.

Hawley told KOMU 8 News he's astonished no one was killed after seeing the destruction throughout mid-Missouri.

"My first thought is that we're awfully lucky that there were not more injuries, let alone somebody killed," Hawley said. "I mean this is very significant damage."

He said he attributes the low numbers to the advanced warning from first responders and weathercasters.

"They had great warning," Hawley said. "I mean they really gave folks warning...and [were] able to get people to safety."

In Jefferson City Hawley toured the old state penitentiary building which was damaged by the tornado. He also visited nearby neighborhoods where residents were cleaning up.

He stopped to speak with some of the volunteers and thanked them for their work. Hawley also urged the federal government to move quickly in providing aid to the city and the state.

"Washington needs to get off its backside and get disaster relief to our communities," Hawley said. "We need it all over the state and folks are going to need resources to recover."