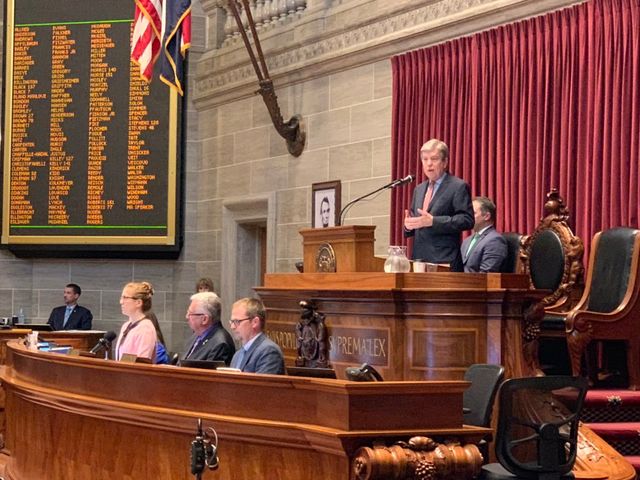 JEFFERSON CITY – Senator Roy Blunt (R-MO) described what he called an "opportunistic" time for the state of Missouri in a speech before the Missouri House of Representatives Wednesday morning.

“Hopefully this is a moment we will take advantage of in our state,” Blunt said. “I think what is happening in health care, rural food demand, what’s happening in geospatial, you can make a case that they are all very good for us if we just make a few of the right decisions right now.”

Blunt told reporters after his speech that he has been discussing possible solutions to the I-70 bridge issues with government officials. The bridge needs replacement, but MoDOT currently does not have the funds to fit the $238 million-dollar bill.

On Friday, Blunt and Sen. Josh Hawley called on Senate Democrats to stop holding up an aid bill that would provide emergency reliefs to flooded areas throughout the Midwest. Blunt said it is time to stop playing politics.

“This is not about the 2017 or 2016 disasters, it is about defining the new disaster, so everyone also has access to those same funds,” Blunt said. “We need to get Missouri flood victims in line for that disaster aid as well.”

In the wake of the recent flooding, Blunt said he hopes lawmakers take the opportunity to review the priorities for the Missouri River. He said it is a delicate balance between flood control and commerce.

“When you talk about aluminum and steel, you are talking about everything from steel nails to aluminum cans and boats and cars and airplanes,” Blunt said. “That has a reverberating impact through our economy.”

Speaking to reporters after his speech, Blunt talked about adjusting to working alongside Hawley who defeated incumbent Claire McCaskill in November.