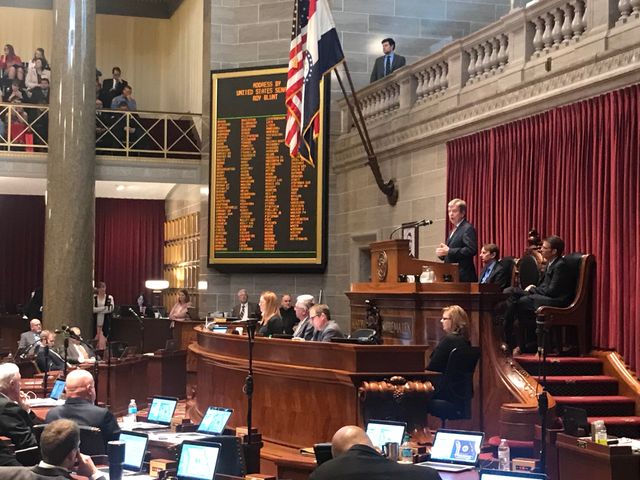 "They need to raise twice as much food on essentially the same amount of land so from an agriculture perspective, not just having broadband to the house but having broadband to the field that lets you and your equipment know what part of the field you're in, what's the best way to deal with that part of the field scene-wise and fertilizer-wise and otherwise is a good idea. But the broader broadband opportunity is just for rural Missourians to be able to participate in that large international economy that you can't participate in without the kind of access that the broadband gives you," Blunt said.

Rep. Delus Johnson, R-St. Joseph, is sponsoring a bill that will increase broadband coverage in the state of Missouri.

Johnson said there are so many reasons to expand it.

"Number one, we have over a million people in the state of Missouri that don't have reliable broadband, 51 percent of the state does not have coverage and we've got to go into some areas that are unserved and this is going to increase online distance learning programs that'll help expand small business and basically help a lot of people to have dependable Internet access," Johnson said.

Johnson said he modeled his plan on Minnesota's legislation, saying he "greatly improved it."

"When we look at broadband, we think about education and healthcare and telemedicine. A lot of our rural medical clinics have been closed down recently; education doesn't have the funding of our urban partners. But when we talk about broadband we say that an Internet connection could bring the highest quality education or medicine to any community."

Tanksley said economic development, healthcare and education are all things that could be improved with stronger broadband access.

Tanksley also said Internet access is a harsh reality for members in the rural community.

When discussing DACA, Blunt said students should be able to keep DACA if they are on their best behavior.

"I think there is a lot of appropriate sympathy for kids who were brought here and grew up here and really know no other country. I thought the president was very forward leaning in the position he took last year and I think a response to that should've been, 'Yeah, we are going to try to solve the problem at its root by giving you the money,'" Blunt said. He criticized Democrats for taking the president's offer to extend protections to children to serve their own political agenda.