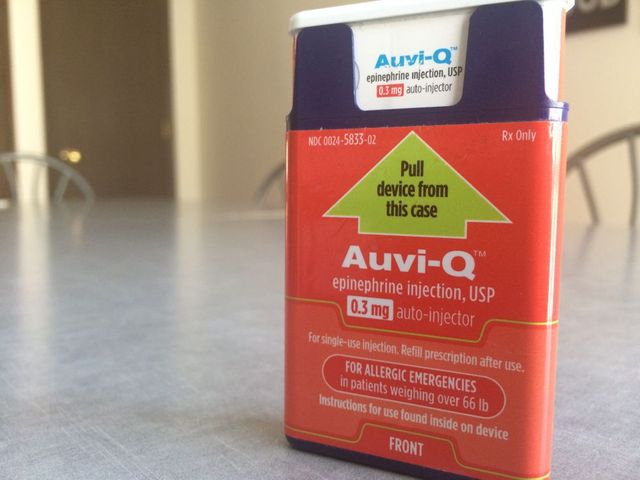 COLUMBIA – The EpiPen price increase in August continues to leave many users in a bind.

Kelsey Buehler has a severe allergy to peanuts. She cannot touch or inhale peanuts, or her throat will begin to close.

“My dad put peanut butter to get gum out,” Buehler said. “I woke up the next day and the whole side of my face was like completely swollen.”

She spent a large portion of her childhood and adolescent years using Mylan’s brand of EpiPen before switching over to Auvi-Q shortly before it was recalled in 2015 for inaccurate dosage delivery.

After the recall, Buehler stopped using EpiPen’s completely because she felt that she could manage without one and she noticed that the older she got, the more expensive the product became.

“I think, now especially, I won’t have one or continue buying them just because they are so expensive. They used to be a lot cheaper,” she said.

In August, Mylan announced a 500 percent increase in the cost of the EpiPen which spiked the price more than $600.

Buehler said she is grateful she stopped before the price hike, but Boone County Hospital nurse practitioner, Marcy Markes, said not having an EpiPen at all has several risks. One issue is accidental exposure.

"They know what they're allergic to and are very cognitive about avoiding it," said Markes. "But the problem becomes when they don't know something has come in contact with something that they are allergic to."

Markes knows how difficult it is for EpiPen users to come to terms with the pricing, but she said not having an one could cost more.

"The risk is always death and that's the biggest one that we worry about," she said.

Instead of using an EpiPen, Buehler carries Benadryl, which is not as powerful as an EpiPen and does not contain the same ingredients.

Since Buehler has been without an EpiPen for close to a year, she has to take precautions, especially when it comes to grocery shopping and going out to eat.

Even her roommate changed her peanut eating habits for Buehler.

Carly Shannon said, “I try to keep peanut butter out of the house. If I do get something with peanut butter in it, I'll make sure its individually packaged and make sure that I'm opening it up in my room."

Buehler said she has calculated her moves to avoid anaphylaxis but Markes strongly discourages EpiPen users from abandoning their devices.

"This is a life saving measure, so we want to make sure that people who need it have it," she said.