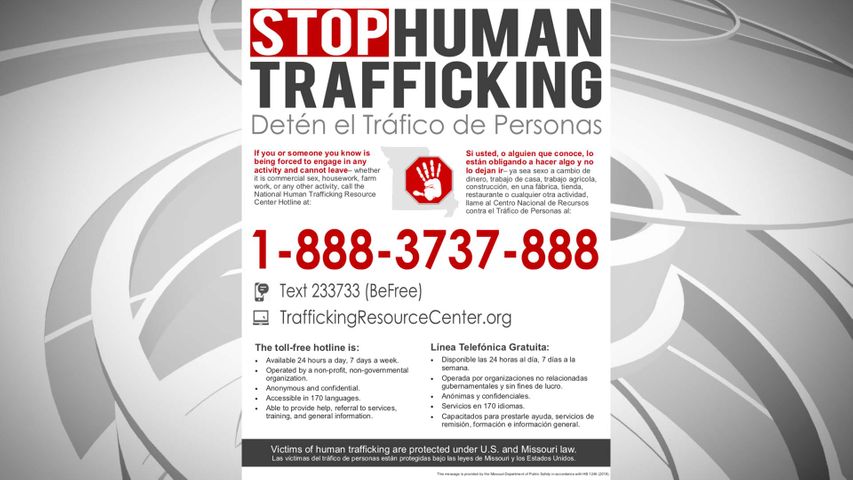 FULTON - Missouri is lacking resources for trafficking victims across the state, with a vast majority of services available in only Kansas City and St. Louis. This poses a problem for trafficking survivors outside of those cities.

In a breakdown of rural trafficking, the international human rights organization Love 146 breaks down the distinction between urban and rural trafficking. In rural areas, the problems of escape distance, victim stigma and lack of available services are key concerns.

When there are larger distances between homes or other buildings, victims have to travel farther to reach a safe place away from their abuser. This gives the trafficker a better chance of finding the victim again afterwards, according to Love 146.

The organization also noted the stigma victims often face in coming forward in rural areas, where its more likely the accused person is known to the community.

There are no dedicated victims services in Missouri outside Kansas City and St. Louis, according to a map of providers from the National Human Trafficking Hotline. The map does say it is "not an exhaustive list" - and that organizations can try and add themselves to the list.

“Rural law enforcement does have fewer resources than some of the bigger cities do," Ladwig said. "When we do have information, we will act upon it and we will do what we can. But there are still fewer resources and budgets for smaller communities.”

Missouri is ranked high when it comes to number of cases reported. However, Ludwig said, there are ways people can keep themselves and loved ones safe.

"Keep a look out at what your kids are doing on the internet, who they’re conversing with," he said. "Check their Snapchat, their Facebook, their WhatsApp, but keep an eye on your kids and who they’re talking to because those could be dangerous signs of someone trying to traffic.”

People who witness suspicious activity that may be related to trafficking are urged to call local law enforcement or the National Human Trafficking Hotline at 1-888-373-7888.