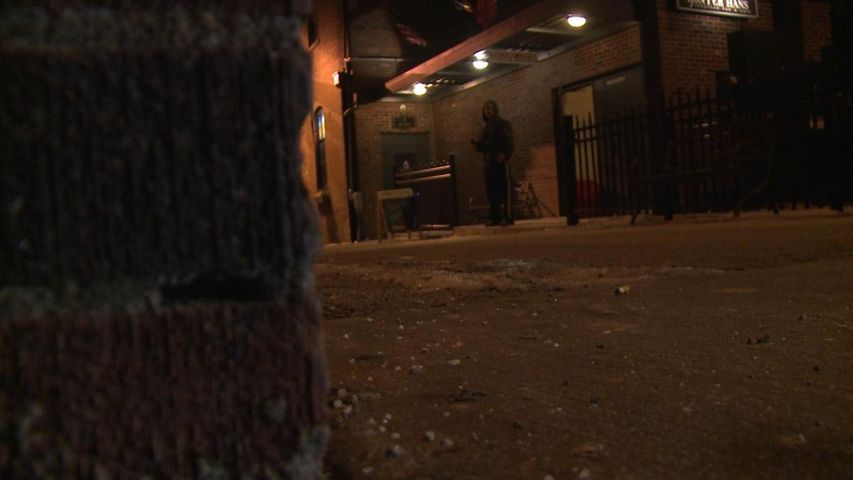 COLUMBIA - At an impressionable 19 years old, one Columbia teen trusted a stranger.

"I thought I was invincible," Jessica Luebbert said.

But she was about to learn a difficult lesson when she encountered a sex trafficker.

"He asked me if I was interested in modeling in Maui," Luebbert said.

So at 19, Luebbert packed her bags and headed to Hawaii. What she found when she got there was not what she signed up for. She got to the hotel and walked into a room that held four men. She thought she made a mistake so she apologized and tried to walk out.

"The four men, older men, quickly shut the door behind me and locked the door. I had my phone and that was all I had. One gentleman took my purse and went that way and one took my phone and went that way and there were two older men in front of me and I was instantly given a shot. Still, to this day, I don't know what I was drugged with the three days I was there," Luebbert said.

The four strangers had purchased Luebbert. In the coming days, Luebbert said, she was drugged, abused, and beaten.

Across the entire United States in 2014, more than 5,000 cases of human trafficking were reported to the National Human Trafficking Resource Center (NHTRC) and Polaris's BeFree texting helpline.

The Department of Justice has identified the top twenty human trafficking jurisdictions in the country. St. Louis made it on the list.

Tracey Perkins, a detective with Boone County Sheriff's Department works with the cyber crime task force and deals with cases of sex trafficking in mid-Missouri.

"It happens and it's here. It's just a matter of catching them or knowing of the actions happening and then we have to act on it," Perkins said.

There are several different reasons people get involved in trafficking, she said.

"There's a lot of desperate people in today's society when it comes to financial stability and sometimes they feel like they have to do what they need to do to make ends meet," Perkins said.

According to her, sex trafficking is happening more and more every day.

"I think it's becoming more common because people are becoming greedier and they know that it's a mass production line, because the more girls you have, the more money you're going to get."

One of the ways traffickers are finding victims is through the Internet.

Nanette Ward, with the Central Missouri Stop Human Trafficking Coalition, said the Web has amplified the issues of sex trafficking.

"Everything is made easier because of social media and the Internet including the selling of people, advertising of people and the buying of people," Ward said.

She speaks to different groups every week including schools, hospitals and businesses about sex trafficking in our communities.

"Once people learn the definition and understand examples of what human trafficking is, what it looks like and all the forms it takes, then people realize they've seen examples of that," Ward said.

According to her, it isn't always easy to identify a sex trafficking situation.

"There are cases where that individual is a victim and not a criminal, what it might look like to us is someone just choosing to engage in prostitution and, in fact, it's someone who is being controlled and very violently treated, in many cases by both the johns, people who purchase sex and the pimp, and there is not really a choice at all," Ward said. "So even within the industry of what we understand as prostitution, there are victims of sex trafficking."

One Jefferson City nurse, Marybeth Gee, said she might take care of people in the hospital and have no idea what's going on in their home life. She said she's probably seen cases involving sex trafficking but didn't know how to identify it at the time.

"With a person who looks like they have more control over that other person and, of course, usually it's a woman and it's a man who is wanting to make the answers for her and take charge of the situation," Gee said.

One demographic group is particularly at risk to be trafficked.

"We have to look at one of the challenging parts about who we are as a community and that's our vulnerable children and youth," Ward said. "We know already there is abuse in homes of children. There's kids who run away, kids who are kicked out of the house, kids who get caught up in the criminal justice system and don't have stable homes."

Ward said those children are at risk for being caught up and lured in by traffickers at a young age. In fact, 13-14 years old is the average age of U.S. children being taken into prostitution.

Luebbert said she was one of those vulnerable teens.

"I didn't have a good home life, dad wasn't in the picture."

But it can happen to anyone, Ward said.

"I want to remind us that it can happen to kids that aren't in a vulnerable situation. They may be at the mall and someone says to them ‘you're beautiful, you would make a great model, why don't you audition for this modeling job' and everything can look legitimate, but in fact, they go somewhere or meet someone and things can really go wrong very quickly," she said.

Ward said the community could be to blame for the increase in human trafficking.

"We have to recognize that this wouldn't be happening if we, as a culture and as a community, didn't have a demand for the purchasing of people for sex or purchasing of cheap products," Ward said. "We have to be willing to address the culture of objectification and the culture of over-sexualizing girls and women that's all part of creating a culture that makes it easy for sex trafficking to exist in our community."

After three long and excruciating days in Maui, Luebbert found her way out. She began to memorize the trash man's routine at the hotel. So one day, she ran to him.

"I saw my chance to get out and I did. I just remember clinging on to him, he didn't speak English, he called 911 and then it took a few days but I eventually got back to Missouri," Luebbert said.

Years later, Luebbert said she has a supportive husband and two children she loves. She is a woman of faith who reads her pink bible every day and highlights her favorite verses. Her house is embellished with crosses around every corner and pictures that read "blessed."

Now, Luebbert works with the Central Missouri Stop Human Trafficking Coalition as a survivor of sex trafficking. She works with recovering victims every day.

"Now, looking back, it was all a part of God's plan. He was preparing for what I am doing today which is mentoring the youth and those in need."

Luebbert said her own experience has made her be a better parent.

"It has taught me to be a much more active and protective mother and I don't veer away from the truth with my children."

To report a case of human trafficking, call The National Human Trafficking Resource Center at 1-888-373-7888.