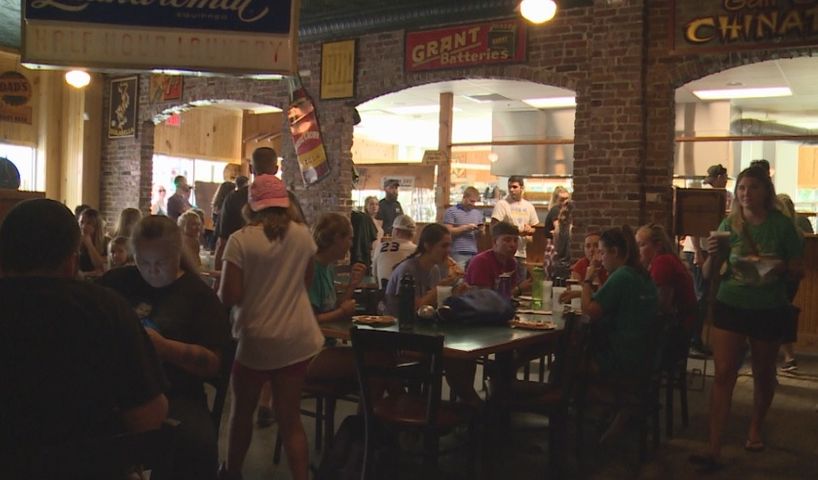 COLUMBIA - Shakespeare's Pizza is officially back. The new building on the corner of Ninth and Elm street invited residents back with a grand opening event Saturday.

While the restaurant officially reopened its doors on August 6, the management held off the event until it worked out the kinks, said Shakespeare's manager Kurt Mirtsching.

“Moving into the new place involved a lot of unexpected things, you know it’s just like anybody that moves," Mirtsching said.

By Saturday, Shakespeare's staff had settled in and invited the communuity to celebrate the reopening.

Mirtsching said the store premade 160 pizzas to give more than 1000 people a free slice.

For residents enjoying the pizza, the new location is strikely familar.

"What’s interesting is, oh my gosh it’s exactly the same except a little more space, but when you walk in the door and you first walk in it’s like, ‘Are you sure this building was gone?'" said Carol Miller, a Shakespeare's Pizza regular and Columbia resident.

Miller has been eating at Shakespeare's since she attended the University of Missouri in the 70's. She said everything from the people to the pizza is still just as great without noticeable change.

Caleb Aponte is a new Shakespeare's customer but has been hearing the same feedback from his friends.

“They said it’s actually eerie because the facilities look pretty much the same, although they’re larger and there’s definitely additions," Aponte said. "A lot of the original look and feel and even the signs are in the same places.”

But, the restaurant couldn't be exactly the same.

Mirtsching said there are some changes to the kitchen but the business hopes to keep the customer experience the same just with shorter lines.

"The original Shakespeare's was really fun but it was built over many decades without any master plan, so it was kind of a convoluted train wreck as far as trying to run a business, but the new one we got to rebuild and redesign everything all over again," Mirtsching said. "So, we laid all the kitchen parts and production parts out much better, so it's much easier for us to make pizza a lot faster.”

Other changes to note is the absence of Shakespeare's parking.

“We’ve got something that we say a lot, 'It’s the pizza stupid' and another thing we say is, 'It's just pizza', so we’re glad to be back on the corner of 9th and Elm making pizza," Mirtsching said.

Mirtsching said the restaurant may look into hosting an annual event similar to Saturday's party.