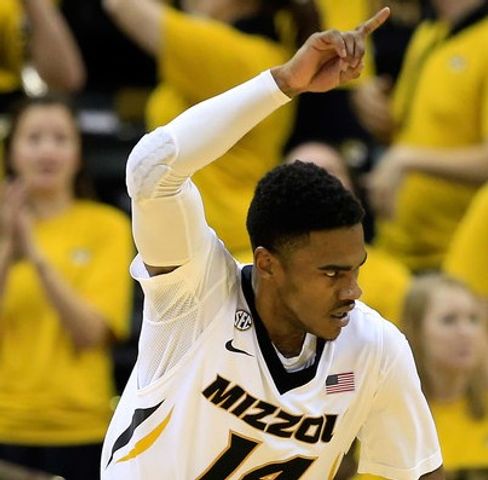 After watching teammate Montaque Gill-Caesar poke the ball away from Auburn's Cinmeon Bowers Tuesday night, the senior instead grabbed it and drained a 10-footer with 10.9 seconds remaining to lift Missouri over Auburn 63-61 on Tuesday.

The game-winning bucket capped a 9-0 run for the Tigers (9-21, 3-14 Southeastern Conference), who won for just the second time in 16 games. Shamburger finished with 21 points, tying his season high previously set at Auburn on Jan. 10.

"I really didn't care about the points tonight," he said. "I just wanted to get a win on senior night."

"I don't know," Shamburger said with a smile when asked if he nudged Harrell. "I can't speak to that."

Auburn extended its losing streak to five games and played without Antoine Mason for a second straight contest after the death of the guard's father, former NBA forward Anthony Mason, on Saturday. Both teams observed a moment of silence before the game in Mason's memory.

A Los Angeles native, Shamburger was already playing with heightened emotions after being honored pregame along with fellow senior Keanau Post. The guard scored 11 points in the first 7:15 of the game to give Missouri a 15-9 lead, but wouldn't score again for nearly 19 minutes.

The break provided an opening for Harrell, who scored 13 points in the final 13:03 of the first half to help Auburn knot the game at 30 at the break. Averaging 17.7 points per game, the senior started 1 of 6 from the field but finished 8 of 16.

"I thought we played great to get the lead," Pearl said. "I thought Harrell was tremendous. He showed why I think he can be a first-team all-conference player."

His layup with 13:46 remaining gave Auburn a 42-40 lead, one it wouldn't give up until a reverse layup by Missouri's Namon Wright tied the score at 61 with 76 seconds left, energizing the crowd of 6,619 and setting up the frenzied final minute.

"That was the difference between the last three minutes and the whole game - we played like we really wanted to win the game, like it was life-or-death situation," Shamburger said. "We just had to go out there and play our hardest, and that's what we did."