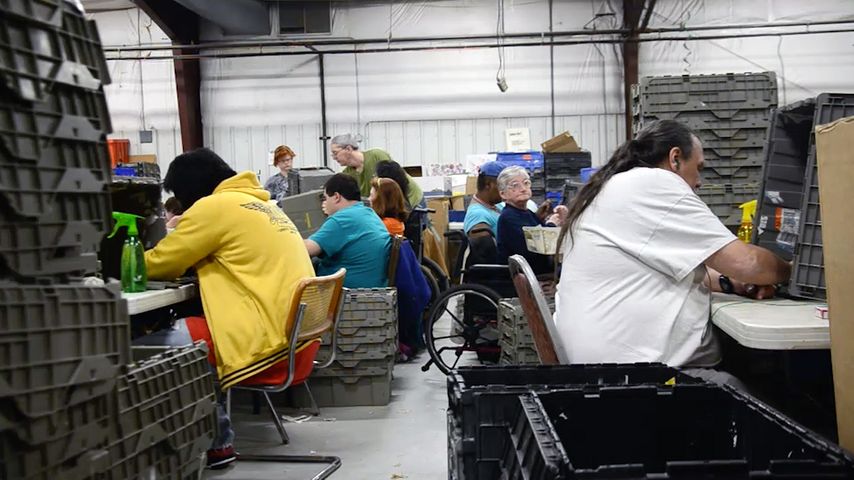 FULTON — Sitting in the back of the Kingdom Projects workshop in Fulton, Tom Faucett connects metal rings and chains over and over, working toward his daily goal of 10,000.

Faucett has worked for 31 years at the Callaway County sheltered workshop, a supervised workplace for people with disabilities. He said the job has helped him control his temper, cultivate relationships and cope with attention problems.

Kingdom Projects and 89 other sheltered workshops in the state employ people with disabilities in an effort to improve their quality of life.

Tec Chapman, Executive Director of Services for Independent Living in Columbia, said  career as an integral part of a person’s identity.

“If you’re an adult, what’s the first thing that people ask you? ‘What do you do?’” Chapman said. “Those are the main common relationship builders.”

Rates of unemployment among people with disabilities vary across counties in mid-Missouri, but Callaway County stands out. It has a rate of 12.4 percent, compared to 18.2 statewide, according to 2013 data from United States Census Bureau.

Callaway County has adopted the national Employment First movement, which emphasizes employment assistance as the top priority for people with disabilities.

Funding for workplaces like Kingdom Projects is done largely through Missouri Senate Bill 40, which covers living and employment assistance for people with developmental disabilities. The bill, passed in 1965, provides 15 percent of the funding for the workshops. Other funding comes from contract work, and the Department of Secondary Education, which provides money based on the number of employees and the hours they’ve worked.

Individual counties decide whether or not to adopt the bill. According to the Missouri Association of County Development Disability Services, 60 of the 114 counties in Missouri have voted to participate. Each has a local board to oversee the distribution of money to counties that have elected for funding under Missouri Senate Bill 40.

“Most people subscribe to the notion that it takes a village, so to speak,” Chapman said. “I think how that plays out in each local community is very different.”

According to Chapman, improving local unemployment rates for people with disabilities starts with raising community awareness.

“Typically when we think about diversity we think about race, ethnicity, gender, sexual orientation, but very rarely do we talk about it with people with different abilities,” Chapman said. “If we can raise awareness of the attributes and the skill sets that people with disabilities can bring to the work force, that would help.”

Robert Honan, director of the Governor’s Council on Disability, questions the effectiveness of workplaces exclusively for people with disabilities. He said integrating them into the wider workforce would be more effective.

“I don’t agree particularly with the older way that sheltered workshops were set up,” he said. “At one time they were really useful, but in some ways I think they’ve outlived their usefulness. I think we should definitely focus more on inclusive and integrated employment.”

Honan said he wants to see the state take a leading role in employing people with disabilities.

Chapman says that the main benefit of integrated employment is higher earnings.

“What we do know is that people want to get out of poverty,” he said. “The positive effects of having individualized, community-based, integrated employment are longevity, increased earnings, and decreased reliance on public assistance.”

In addition to economic benefits, there are social benefits to integrated employment, he said.

“More important is that social network where they can develop relationships with people that they otherwise would not have had the opportunity to find,” Chapman said.

Kingdom Projects Manager Lonn Little said he doesn’t think workplaces for people with disabilities need to be mutually exclusive from other workplaces.

“We want people to take an opportunity if they have an opportunity to try out a job outside of here,” Little said. “We encourage that, and if that happens and that's not successful, we try to maintain a place for them to come back to. We don't close the door and say ‘Go try it but we don't think you're going to make it.’ We want to try to support it.”

Chapman said the choice of a workplace boils down to personal preference, but that no matter what, workplace diversity strengthens the community.

“I think it’s just understanding that we all have different abilities, and that each one of those abilities can be an asset to our local community, not only economically, but also just from the overall social fabric,” Chapman said. “That’s what makes our local communities and our country so great.”