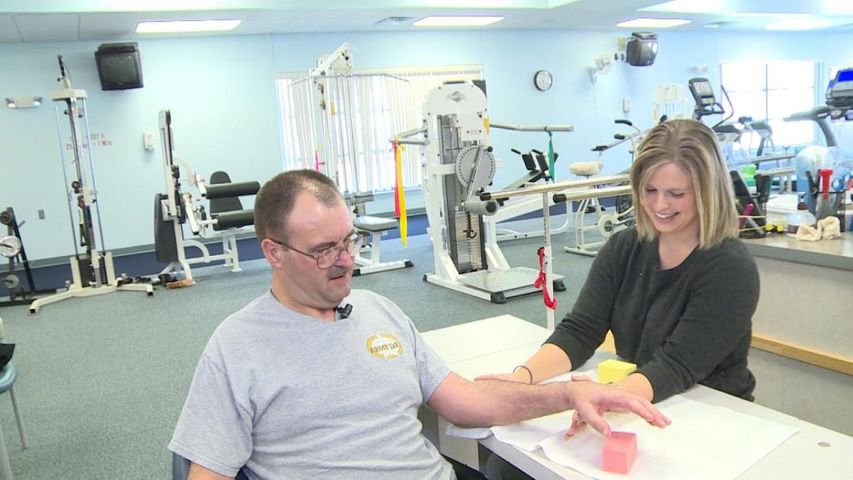 ELDON - Troy Frakes' new nickname is Iron Man. His leg was completely rebuilt after he was hit by a Chevy Silverado while working as a part-time sheriff's deputy in Chariton County last September.

"They weren't sure if I was going to live," Frakes said. "They say there were about three different times when they almost lost me."

Frakes is walking now, but had to use a wheelchair for months while recovering in Eldon, where his mother lives.

"We decided it would be best for me to stay here," he said, "This house is already handicapped accessible."

Frakes does occupational and physical therapy at least three times a week for 90 minutes each session. At times the pain was so great that therapy was difficult.

"My therapists at Lake Regional, they are just saints," Frakes said. "They've seen me at my worst, but they're helping me become my best again."

Frakes said he is determined to regain his pre-accident mobility.

It may take up to two more surgeries. Frakes said he still has issues using his left elbow, wrist, and hand.

His occupational therapist, Katie Kelley, said Frakes pushes himself every day in therapy.

"Whether it's practicing folding towels or doing uncomfortable stretches with his left arm, he puts his whole self into it," Kelley said. "His strength and his demeanor have increased so much since I first started working with him."

Frakes said one of the hardest things since his accident is simply surviving financially.

"I was so blessed by the outpouring of financial support from both Chariton and Carroll Counties," Frakes said. "But I receive only about $200 dollars in worker's compensation each week."

That's because Frakes was hurt in Chariton County, where he worked only part-time. His full time job was with Carroll County.

"A lot of us in this profession work two jobs simply to make ends meet," Frakes said. "I never became a deputy for the money. I became a deputy because I wanted to help people."

Frakes' accident isn't an isolated one - MODOT reported 9 people in Missouri died after being hit by vehicles on the job in 2014.

Rob Kiesling, a retired Columbia police officer, was hit by a car more than 20 years ago while directing traffic.

He said, while his accident was scary, he was a lot luckier than Frakes.

"I got clipped in the leg while trying to prevent a driver from hitting a stalled car. I flipped up and over the car and landed on my back in the middle of Providence Road," Kiesling said. "Somehow, no other oncoming cars hit me, and now I only have a twisted femur to show for it."

Kiesling said he was back at work in a week.

Frakes still has a long road ahead of him before he returns to duty, but he said he has no ill will towards the man who drove the truck that hit him.

"I know he is a good man," Frakes said. "It was an accident, nothing more. It traumatized me, but I know it also traumatized him."

Frakes said he and the driver of the truck frequently meet up.

"He visited me in the hospital, and I've visited him at work," he said. "We're there for each other."

Frakes said he does have some advice on how drivers across Missouri can better protect those who work on or along roads.

"Pay attention to the move-over laws," he said. "Keep your eyes open, and just slow down. If you can, change lanes as far away from a worker or law enforcement officer as possible."

Frakes said he plans on doing whatever surgeries it takes and continuing physical therapy for as long as necessary.

"I just want to go back to the job I love - protecting the people in Chariton and Carroll Counties," Frakes said. "The people there have done so much for me since I've been hurt, and I just want to get back to my work there."

The sheriff's departments in Chariton and Carroll Counties created a fund to help Frakes as he recovers.