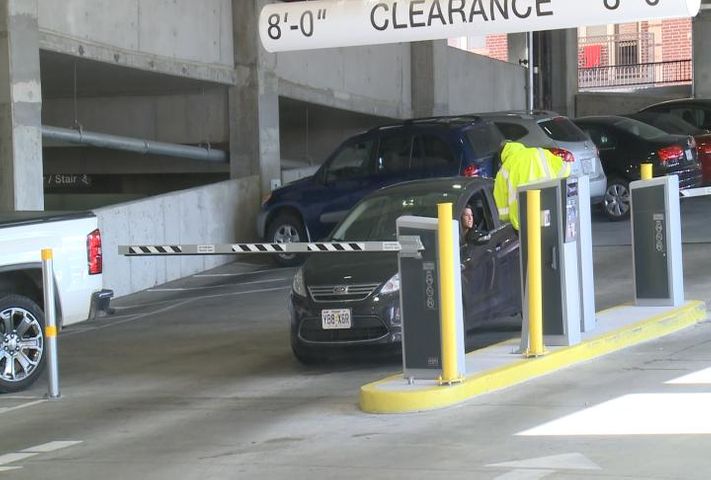 The mechanical arms that let cars into and out of the garage have had mechanical issues for months, according to Columbia Public Works. That caused the barriers to lock while they were down. As a solution, the barricades were left up, much like they are on weekends when parking is free. Those paying $75 a month for a parking permit said they are frustrated the process took so long.

"It's probably been like four or five months," Joe Stone said. "I just feel like they're always broken."

Chelsea Becker said, "We pay almost $80 a month to park here, and this is probably the first time in two to three months that there has been any kind of coverage for people to come in and out."

"It has been an extended period of time," Sapp said. "We started having problems with it in the fall. Some of those problem we thought were solved at one point, only to reoccur again, so that's why the manufacturer of the equipment was brought into the conversation."

Sapp said the arms were left up to allow people to enter and exit the garage without being trapped and because the city has a contract with The Broadway hotel next door to provide parking for its guests.

"The best solution for us at the time was simply to leave the arms in the up position until we could correct the problem," Sapp said.

But Stone and Becker said open parking created a problems for them.

"Sometimes it's impossible to find a spot in this parking garage," Stone said. "There's been multiple times, two times, that I got towed because this parking lot has been filled, and I've had to park elsewhere. It's very inconvenient."

Becker said, "Thursday through Sunday we have to park on the top floor because of the bar area and people coming and going. There's no space for us to park, and it's frustrating. We bought a second vehicle, and we park downtown somewhere else because we don't feel obligated to pay that kind of money when no one is restricting parking."

Paying for parking became an issue for both the city and those with permits, but for opposite reasons. With the arms up, many assumed the garage was free, leading to possible revenue loss for the city or reimbursement for those paying for permits who couldn't find a parking spot.

"Parking was never free," Sapp said, "But obviously some people probably took advantage of the fact that the arms were up. So the question then becomes is there any way to recover revenue that may have been lost? Is there a recovery system for any financial loss? Do we have people that couldn't park here and do we need to provide any type of compensation for that? All of those are questions we continue to work on."

Sapp said he's not sure when the garage's project manager will have those answers, but said he is optimistic that the mechanical issues are resolved.

"Hopefully it's complete as of today," Sapp said. "The arms are down, the manufacturer feels pretty confident that they've got the issues solved at this point, but we're going to be watching it everyday to make sure."