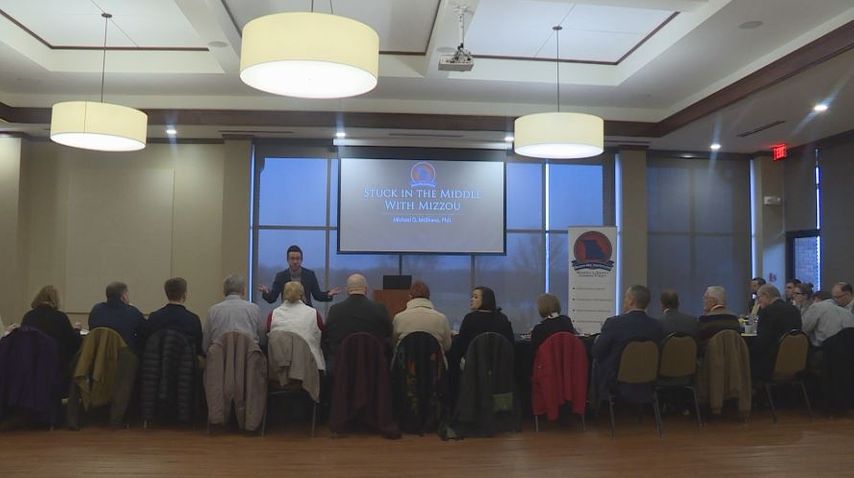 COLUMBIA – For more than a year, the University of Missouri has been in the spotlight, discussed and debated in public and in the halls of the state Capitol.

A state think-tank, the Show-Me Institute, weighed in on the matter on Tuesday in an attempt to measure MU and its mission as the state's premier research university.

The Show-Me Institute hosted the Show-Me Forum: Stuck in the Middle with Mizzou presentation on Tuesday at 7:30 a.m. at the Country Club of Missouri to discuss data on MU’s performance.

With the recent appointment of a new president and the aim toward a new direction for the system, the non-profit wanted to look at how MU is performing.

Michael McShane, director of education policy at the Show-Me Institute, argued issues on campus have presented opportunities to think about the way the university operates and consider ways to improve.

The impact of enrollment declines at MU was one of the ideas that spurred his work.

McShane presented his research on where MU stands in comparison to other schools across the state, region, and nation.

“On most indicators that we find about the outcomes that we have of students who graduate from either public research-1 universities, or research 1 universities in the region, Mizzou tends to fall kind of in the middle of the pack," McShane said. "It's not at the top of any of these indicators and its not in the bottom, that’s where the name where Stuck in the Middle came from.”

"We use two data sources. One is federal IPEDS data, so it’s a national, federal database of statistics," McShane said. "And that tells us about a lot of things like enrollment, some of the incoming characteristics of students, so demographic characteristics, things like ACT scores and others and then we pared that with things from the College Score Card which looks at outcomes."

He also said, "We used federal government data the Obama administration put together called the College Scorecard which links earnings data and employment data to information that they have from colleges so we know roughly speaking for students who receive federal financial aid how much money they’re making in the years after they graduate, their employment, things like that."

Michael Podgursky, professor of economics at MU and board member of the Show-Me Institute, discussed what he hoped the presentation would accomplish.

“Hopefully we can at least get some of the leaders at MU and the political leaders in the state to begin thinking about these ideas,” Podgursky said.

McShane said community members have a stake in MU because its success affects the state.

Roger Fries, a Columbia resident who frequently attends Show-Me Institute presentations, said there was more interest in this one in particular.

He said he hopes MU improves its standing.

"I hope we can become a little bit better than middle or somewhat better than middle," Fries said. "It seems like the opportunity is there. I realize that funding is tough in the state right now but the university I think has to prioritize and put funding into the strong points and cut back on some of the areas that are not as strong."

McShane hopes his presentation informs stakeholders in higher education including lawmakers, employees, taxpayers and students with a set of facts to base their discussions.

The goal is to encourage data-based discussions about MU and the University of Missouri System.

The data from the presentation will be published in a research paper in the next couple of weeks.

KOMU 8 News reached out to the MU News Bureau for a statement about the research and presentation.

"University of Missouri leaders are appreciative to those throughout the state and nation who have shown passion and interest in the important issues facing Missouri’s land-grant university. Our leaders are listening and engaged in this conversation as we always look for ways through which we can improve.

"We are proud of the accomplishments of our students, who are preparing to become future state and national leaders, and our faculty, whose groundbreaking discoveries in the laboratories are saving lives and creating new companies and jobs for the state of Missouri.

"As one of the first institutions to join the Association of American Universities (AAU), we attract nationally prominent faculty who are leaders in their fields and elected members of national academies and key academic organizations. We continue to be the state’s largest and most comprehensive university while serving as an economic engine for the state and nation."