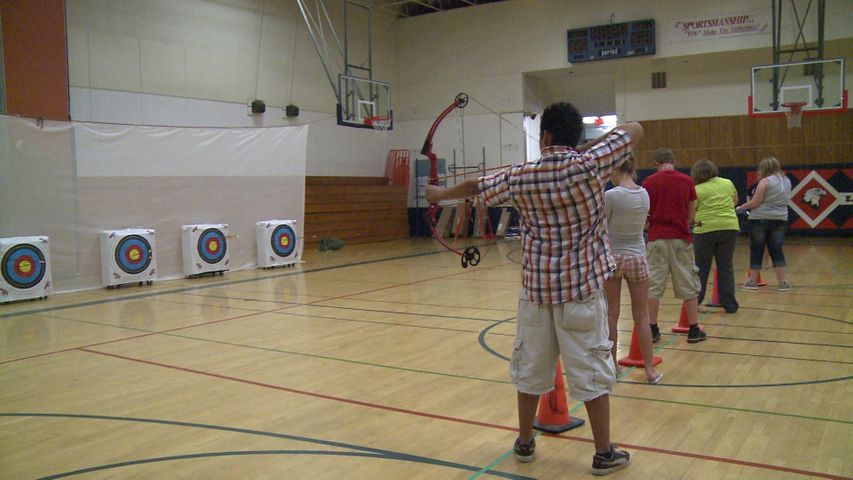 The Missouri National Archery and School Program, or MONASP, allowed students ranging from the fourth grade to 12th grade to participate in groups or as individuals in the new archery event. It marked the first group archery competition in the Show-Me-State games.

Participant Anna Reinkemeyer first got involved with archery three years ago when she learned she was going to Helias and “[the school] had an archery team and my grade school didn’t have one, so I figured I’d give it a try.”

Now, Reinkemeyer is participating in national level tournaments and placing among some of the very best. “I [placed] third at nationals [out of 6,000 girls],” Reinkemeyer said.

The event officially began Saturday morning at 9:00. at Battle high school. It had two major heats, one at 10 meters and another at 15 meters. Each archer would be shooting at an Olympic style target and would get a practice round before shooting for points. A perfect score for the heat would be a 300.

Katie Fredrickson, also a participant, said archery “help with my grades and school and it keeps me, keeps a lot of kids, in school. It helps with a lot of your life skills.”

Fredrickson, a double state champions, learned to first shoot the bow and arrow after helping her family on their farm.  After doing chores, she would go to practice. She credits working on the farm for helping her to build up enough muscle to get better at aiming towards the target.

The MONASP archery event was first brought to the games thanks in part to the Missouri Department of Conservation. The organization provided both supplies and support.

Emily Lorenz, media coordinator for Show-Me-State games, said the Department of Conservation is looking to grow their NASP events over the next few years, which led to the addition of the archery event this year.

Eric Edwards, Missouri Department of Conservation education outreach coordinator, explained archery isn’t just a one-time thing. “Archery is a lifetime skill. It’s something you can start at a very early age and you can go on forever,” Edwards said.

Edwards believes participation in the NASP is key for students because they are able to pick up another team sport. “Kids that do NASP, they’re not part of a basketball, or baseball or football team or band or something like that. So this is their first real experience enjoying and learning what team is all about and how to work with your fellow teammates,” Edwards said.

While the archers participate in several different tournaments a year, they enjoy getting to participate in this one with their classmates and friends.

The Show-Me-State games is an Olympic-style competition for Missouri state amateur athletes. It is held in Columbia and is the largest state games in the Unites States. It takes place during three weekends in the summer. This year they are June 16-18, July 21-23 and July 28-30.