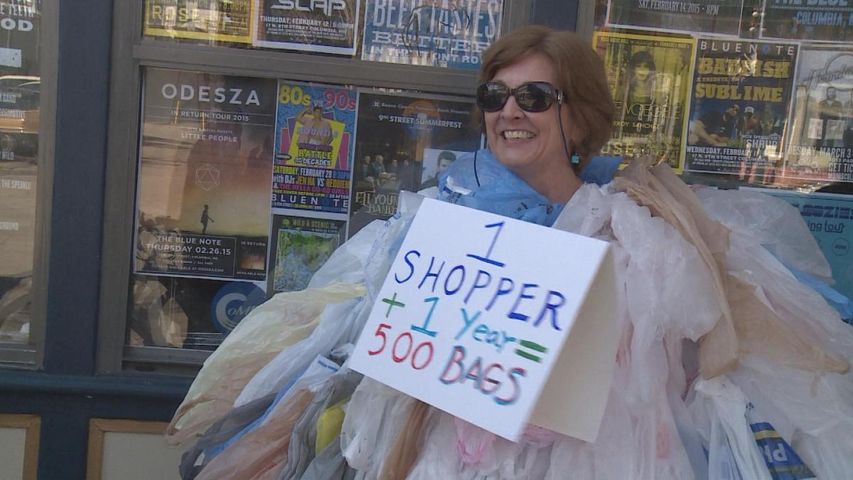 COLUMBIA - Carolyn Amparan has been passionate about environment-friendly policies for quite a while, but was never extremely active until a few years ago.

"Before that, I was kind of what you would call an email activist," Amparan said.

Now, as the chair for the Osage Group of the Missouri Sierra Club, she is leading the push for an ordinance set to reach the city council that would ban single-use plastic bags from grocery stores in Columbia.

Amparan said changes are needed to eliminate what she calls the waste of resources that can be harmful for the environment.

"Of course, there are a lot of people that are opposed to it, people who are set in their ways," Amparan said. "They're used to the plastic bags."

Some residents are also opposed to the ten cent cost associated with the ordinance that stores would be able to charge customers for having to buy paper bags.

But, Amparan said the purpose of the fee is to encourage customers to reuse bags.

"You don't want to just drive people from using plastic to paper," she said. "The goal is to get people to understand that the best choice for sustainable living is a reusable bag."

One resident said the unfamiliar policies tend to make people hesitate to support them.

"People have a fear of change and feel sometimes that that will impose on their freedom," Eric Pherigo, a Columbia resident for the last seven years, said.

Although it's a new concept for Columbia, the plastic bag ban has already passed in several cities around the United States.

Even in the Midwest, ordinances similar to the one in Columbia have already passed in Chicago, Evanston, Illinois and Marshall County, Iowa, in the past six years.

Amparan said while Missouri is rarely considered a leader in environment-friendly policies, Columbia is different.

"Columbia has curbside recycling, bike paths and all those great walking trails," Amparan said. "Columbia is a more environmentally-friendly city than perhaps some of the rest of Missouri."

This is in part why Pherigo said the passing of the ordinance wouldn't surprise him.

"All this stuff like the bags, it's all doable," he said. "I think once people can make that change, they will be more supportive of it."

On February 8, Amparan and other Sierra Club members stood outside the Missouri River Relief's Wild and Scenic Film Festival at the Blue Note to encourage people to sign a petition for the ordinance.

Amparan wore an outfit composed of 500 plastic bags to show the number that an average shopper goes through in a year.

The Columbia City Council is scheduled to have its first reading on the ordinance on Monday.

Unless the ordinance is tabled, a vote will likely take place in the beginning of March.