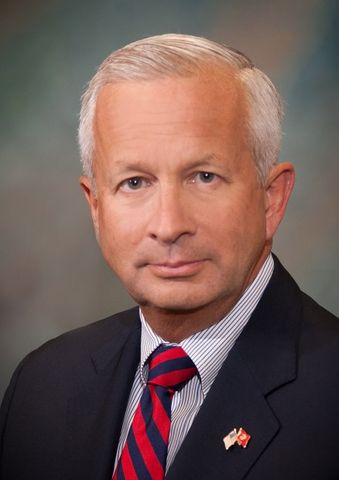 JAMESTOWN, Mo - KOMU 8 News spoke with John Brunner as part of our Smart Decision 2012 election series. Brunner is a republican candidate vying to defeat U.S. Senator Claire McCaskill in the November election. Brunner is one of 8 republicans eligible for vote in Tuesday's primary election.

Brunner is a native of St. Louis and focuses on supporting small businesses across Missouri. Up until 2009, Brunner served as CEO of Vi-Jon, a private-label personal care products manufacturing company founded in 1908 by his grandparents, Viola and John B. Brunner. John got his feet wet in nearly all of the company's operations, from operating forklifts, loading trailers, repairing production lines, mixing millions of gallons of raw materials, and traveling the country selling Vi-Jon's products. The company is best known for manufacturing Germ-X.

Brunner also served as an infantry officer in the United States Marine Corps. He completed his service as a Captain. Before that he held positions including Platoon Commander, Executive Officer, and Adjutant. His experience in the service includes joint operations with many of the NATO allies as part of the armed forces' "contingency reaction force".

Brunner's campaign slogan is "Get America Working Again." Brunner told KOMU 8 News he is running on a platform of "Citizen Government."

Brunner received his M.B.A. from Washington University in St. Louis.

What makes you the best candidate qualified to be senator?

"I'm the only candidate either the Republican or Democrat side that has three decades of experience in the private sector. I've been part of the school manufacturing business for over 33 years, a business today that's very very successful. They've hired more people than anytime in it's history here. I've took a small business from 40 individuals to over 1,400 individuals serving retail customers all across the country. It's all about jobs--we're hurting on our jobs, and if we're going to get jobs back in Missouri and in America we've gotta get somebody who has experience doing that. These career politicians have experience on 30 second sound bites and running for re-election and publicity and all these issues that we don't need at this time. They're more interested in their career, their jobs, and their pensions, all these issues that are going to do nothing to get jobs back in Missouri. That's where the big difference is--I'm running as a citizen senator and not a career politician."

"What do you want America to understand by Citizen Government?"

"What we need is what our founding fathers was striving for and expected--is that people with decades of experience -- whether medicine, agriculture, ranchers, educators, manufactures, that'll take those decades of experience to Washington D.C. serve two terms or a term and get home. Get there, get the job done, and get home. Not to continue to make a lifetime on a career as a politician. That's why citizens working people understand what the problems are--we're the ones who can solve them."

How would you work with Congress to accomplish your agenda?

"Far too many are operating in their own cubicle -- silence-- a good team or organization operates as a team. I learned that as a marine infantry. Pull together a team as a small manufacturing business--we pull together as a team we share ideas, communicate. All with clear objectives--what's the mission? What's the definition of victory? How are we going to get that order? How are we going to get that new customer?"

"On top of all that we don't have an energy program. We don't know what the price of energy's going to be they could wipe out our profits for the next year. Same thing with ranchers and farmers we have American energy but we're not using it"

What do you think is the biggest issue facing Missouri right now?

"The number one issue facing Missouri -- already a tough economic time -- all the government regulations, high energy costs, and high taxes. We have a tsunami coming in which is called 'Obama Care', I call it 'Obama Claire', because she was the deciding vote on that program. Claire Mccaskill said 'well try it out you might like it.' The hypocracy of the situation is that senators and congress people are excluded from that care. They get their own special form of out care and yet they want us to do something that's going ot destroy medicine, destroy healthcare as we know it."

As President Obama's healthcare reforms begin to go into effect, how should Missouri react?

"Missouri should react by, first of all, electing a citizen's senator someone who's actually been there and understands the ramifications of these issues. I know first hand what its like with increasing regulations and I know first hand talking to manufacturers, ranchers, people all across the state -- worried that their businesses, their farms, and ranches are going to shut down with this Obama Care. "We need to...break down the regulations, make it more affordable, especially engage the doctors and nurses. The Affordable Care Act, first of all, is not affordable. "It's now approaching 2 trillion dollars in terms of our economy. "People are asking for exclusions--it is a disaster. We have to stop this as best we can. And it can be done by electing good people to the U.S. senate who understand these issues because they've been in the real world.

How would you put more Missourians back to work?

"Get people working again has been my whole life, my whole passion. We have a family history of what kind of environment we need to succeed in. Get big government off our backs. Clear the track of regulations, dependence on foreign oil, of the highest tax rates in the world. Americans love to work, to produce, to add acreage to our farms, we love to add new equipment to our factories. And just as important...or even the most important...is the folks that are graduating from college. 53% of the college graduates are unemployed or underemployed. Where's their hope at the American Dream? These graduates are looking to be a part of industry, a part of education, a part of medicine but jobs are shutting down because of regulations. American's know what we have to do...the Federal Government does not."

The nation faces many budget challenges in the coming years. How would you work to meet those challenges?

"In the last 11 years our expenditures in the fed have doubled.. we cannot continue on this trujectory."

"Alot of our debt is owned by foreigners...we do not want foreigners to se the terms of these debt repayments."

"When you owe a lot of money to people you put yourself in the situation that limits a lot of other options. So we have to stop the spending. And there's a big political problem about cutting spending because all of these politicians want to continue to promise the same things over and over again to get re-elected. It takes somebody with some guts and some courage to say we have to stop some spending."

"Just get these burdens off the back of farmers, get the regulatory costs off, they're going to start hiring again. we're going to find this economy booming again--if we just get the big government regulations off our backs."

How would you bring Missouri to D.C.?

"If you haven't been living in Missouri for a few decades... if you've been in government offices, or you've been in Washington D.C., or Jefferson city...you've lost touch with the real world. This is what will happen...all these folks start with good intentions but they lose their edge. That's why they have term limits on all these people. When you're closer to the folks and the people and where the real work is getting done. You can do a better job.

"I've spent a lot of time in Missouri, I understand what the issues are. Get me to DC for one term or two terms, I'll get the job done and get home."

Can you describe the nation's economic focus for the future and how you would take us there?

"Our country's economic focus should be getting the jobs back."

"We can restore the 'American Dream,' we can restore economic prosperity, and we can be the leaders in the world again."

"Get citizens elected in there to get the job done with the right motivations, that's going to be the answer."

What will be different once you've served another term in this office?

"Hopefully we'll have 51 republican senators there because Harry Reid has failed to have a budget. We need a budget--an economic one--last May he said it'd be foolish for us to have a budget. So we can take control of the Senate and take control of his committees, and get good business, people, ranchers, farmers, people with medical backgrounds, citizens...more citizens in there. And take ownership of the Senate so we can get the agenda back on.

"For the democratic party to enter into our Republican Primary and attack me as a candidate Why is he [Harry Reid] attacking me and my other two opponents? Because he realizes Calire McCaskill has a cahnce at winning if the other two individuals win. If I win this primary, Claire McCaskill is going to be defeated."