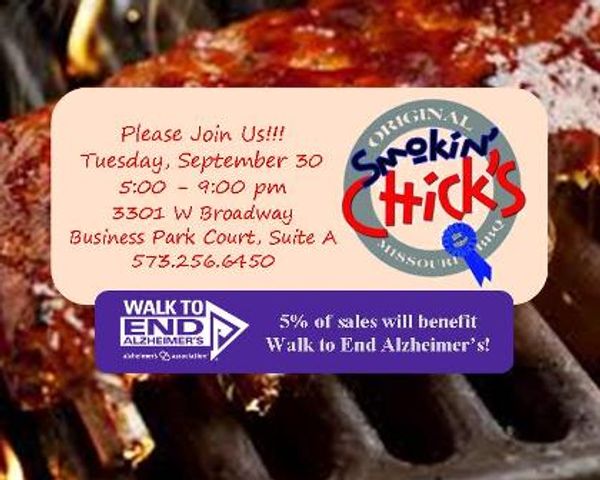 COLUMBIA - Behind the Alzheimer's Association building on Bluff Creek Drive is a quiet garden with a special meaning.

In front of a fountain is a collage of bricks with memorials inscribed in them.  One reads, "In Memory of a Special Lady Marge Richmond."

The association will receive a donation this week from Smokin' Chicks BBQ after their final fundraiser Tuesday night.

Every Tuesday in September the restaurant has put aside five percent of all sales during the dinner hours of five to nine. After their final fundraiser Tuesday night they will total all the sales and write a check for the Walk to end Alzheimer's in Columbia.

The event is a two mile walk in Cosmopolitan Park that raises awareness and funds for Alzheimer's. Registration is at noon Sunday and the walk will follow shortly.

Janie Elson, the director of communications at the Alzheimer's Association, said the money will go to a couple of places. "We give money to families that are afflicted by the disease and also to research because there is no cure or prevention," Elson said.

Elson said a group from the association has been going to the weekly dinners and said they've noticed a large crowd.

Elson and the Alzheimer's Association said more than five million Americans live with the disease.