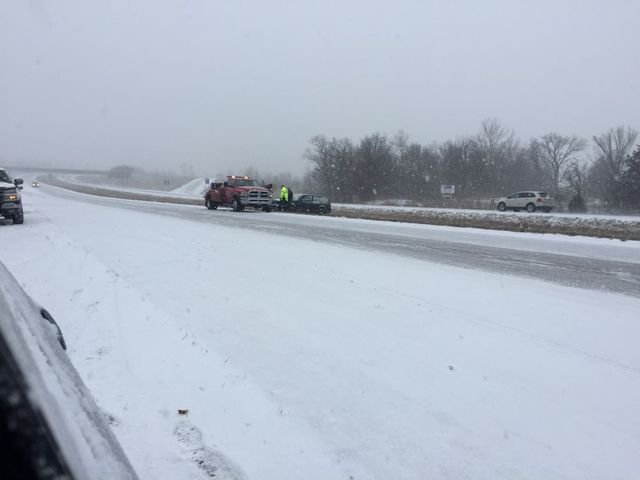 COLUMBIA - It didn't take long driving in Columbia Tuesday before cars ended up in ditches, and traffic slowed down because of snow-related crashes.

According to CPD Public Information Officer Latisha Stroer, CPD was dispatched to 24 accidents as of 4 p.m. Tuesday. She said the first was at noon.

Officers were not immediately able to say how many cars were involved in a crash on WI-70 near the Rangeline exit, but at least eight cars were on the side of the road.

There was a car on the left side of WI-70 that appeared to have crashed into the median and a car in the left lane of I-70 that was spun backwards, with the bumper crashed into another car.

Just a little past those cars was a line of about 6 cars pulled to the side on the exit ramp waiting for assistance. A CPD officer said there were so many cars involved that nobody could quite figure out who hit who.

One of the drivers pulled to the side on the exit ramp was Corey Sapp, who had a lot of damage to his car bumper in the collision.

A little further down on WI-70 there was another multiple-car crash. Both accidents left traffic moving very slowly throughout much of the afternoon.

One driver was taken to the hospital after a two-car accident on US 63N near Bear School Road. The Missouri State Highway Patrol did not know the severity of the persons' injuries. CPD did not have an update on any crash-related injuries as of 4 p.m. Tuesday.

Sapp said he wants to warn people to drive slow and be careful.

"The roads look pretty good, but as soon as you hit your brakes, it's pretty slick," he said.