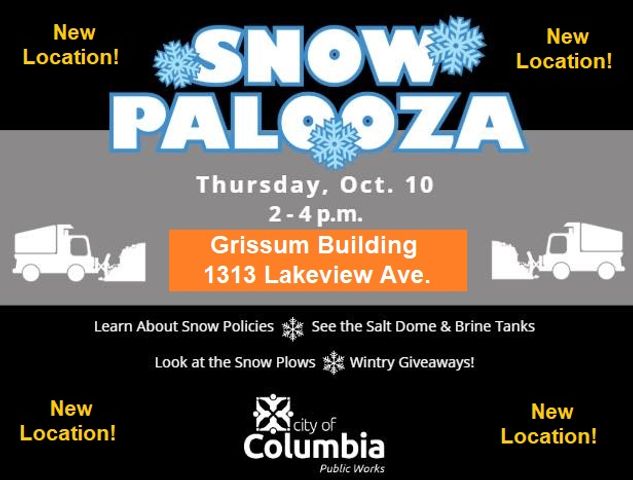 COLUMBIA -This year's Snow Palooza is going to look a little different than past years. For the first time on Thursday, local schools will send field trips to the Grissum Building on 1313 Lakeview Ave.

"There's going to be three classes," Public Works Department Community Relations Specialist Barry Dalton said. "So there will be a morning class at 8:30, another class at 10, and another class right after lunch."

"There'll be lots of kids and lots of booths and activities going on throughout the day," he continued. "Then the public portion is 2 to 4."

Public Works Engineering and Operations Manager Richard Stone says the event will give the public a chance to see how the city operates and mobilizes snow removal trucks during the winter.

"It's an opportunity for us to kind of show the public what all we do from a winter weather maintenance perspective," Stone said. "We will have all of that information available on boards, and we can show them trucks and how our equipment goes together."

Snow Palooza started three years ago as an effort for the department to get touch with the community.

"Generally in Public Works, we don't promote ourselves very well so that’s what we're trying to do," Stone said. "It's just let people know that this is what we do and how we go about doing it."

But keeping Columbia's streets clear during the winter is no easy task.

"A lot of people are generally surprised by all of what it takes to put together a winter weather response just from both a planning perspective and from the actual implementation of doing it," Stone said. "These are big pieces of equipment so sometimes they are daunted by the size of these trucks and the plows and what it takes to maneuver these things."

Sometimes preparing for the next winter season lasts through the other three seasons and Stone called it a "year-round process."

"We really start ramping up as we enter into August and September making sure we've got salt, making sure things are prepped and ready to go," he continued. "Then in October making sure all the trucks are ready to go for the winter weather season that's ahead."

Stone ended his interview with a request to drivers during the upcoming winter months.

"I just ask everybody as we enter the winter weather season make sure their cars are up to snuff, ready to go, and everybody's paying attention," he said. "And if they can not park on the street, that's really going to help our response time."

The Grissum Building serves as the winter operations center for Public Work and will host Snow Palooza for the first time due to forecasted rain changing the venue.

Snow Palooza is open to the public from 2 to 4 p.m.