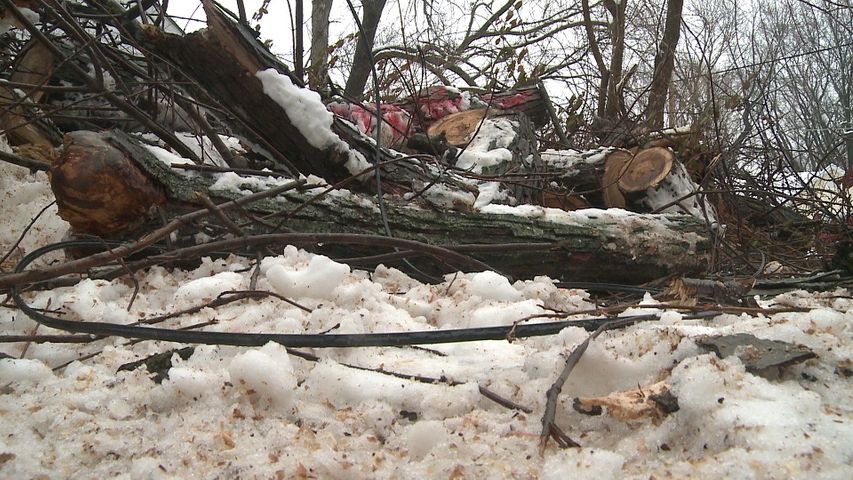 COLUMBIA - In the midst of Tuesday morning's snowstorm, Ryan Gentges awoke to a loud boom in his home on McBaine Avenue.

"I just attributed it to something else," Gentges said. "I was in a drowsy mode of sleep at that point."

When he walked out of his front door and trudged through his snowy lawn to check out the damage, he discovered an entire tree had collapsed in his neighbor's lawn across the street. The tree knocked down his neighbor's power line, and city crews spent most of the morning and early afternoon repairing it.

Gentges didn't lose power in his home, but he did have a scare in the afternoon when the wind blew a load of snow off his electrical line and caused it to sway momentarily.

"I'm glad it was just snow and not a line," Gentges said. "It might have taken away my Internet."

McBaine Avenue wasn't the only area in trouble during Tuesday's snowstorm. Columbia's water and light crews said there were lines down "everywhere," and at one point this afternoon, crews had responded to roughly 100 problem areas for repairs. Just down the street from Gentges on Garth Avenue, almost a half-dozen crew members worked to repair another fallen power line.

Luckily, Gentges' neighbor was not home on Tuesday and did not have to endure crews working on his home. The two trucks left around 2 p.m., and Gentges then returned to more important activities--like building a "snoctopus," a cross between a snowman and an octopus.

"I might even spray paint it," Gentges said. "It'll probably take all day."