So. Boone's Bossert shoots for honor on, off court 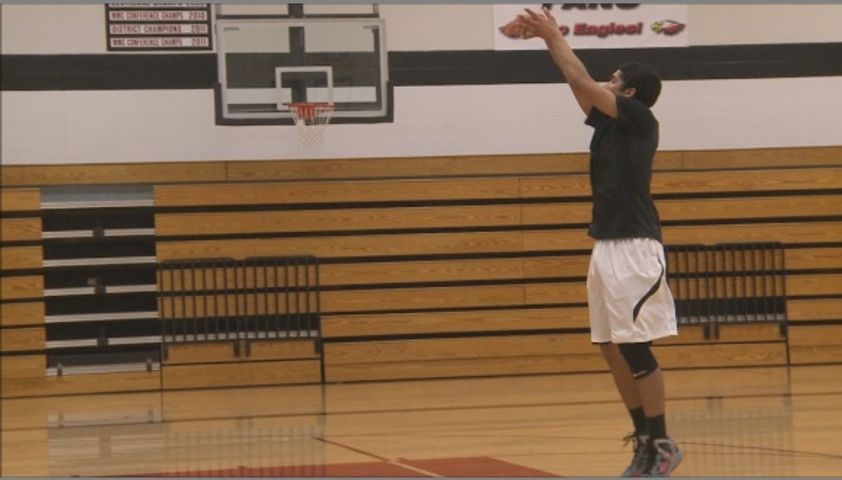 Oftentimes, the senior center has to compete for playing time.

Off the court, Bossert is also in a neck and neck competition - in this case, for Southern Boone's valedictorian award.

"I love competition," Bossert said. "Competition just drives me to do everything I do. So competing for valedictorian was a no-brainer for me, because I love to work hard in the classroom and on the court."

Coach Andy Jahnsen has watched Bossert develop over the last four years. The two share a love of football. Bossert played quarterback for the Eagles in the fall; Jahnsen is the school's defensive coordinator.

"He's one of those kids you dream of - a great student in school, a three-sport athlete," Jahnsen said. "He does just a tremendous job of being a leader. He's just one of those kids where it seems kids just want to follow him. He does all the right things: works hard in practice, he does all the right things in school, community leader. I'm proud of what he's done in his high school career."

Jahsen said in the time he's worked for Southern Boone, he hasn't seen a valedictorian-athlete hybrid, or anyone with quite the determination Bossert has.

"He's very witty. He's always got a comeback for you," Jahnsen said. "I think he's just truly a hard worker. He's been blessed to have that ability, to really put in the time to do the things that are necessary to be successful. I think that's really on him. For him to be able to take ownership in that, again, I think it's something you can't teach. It's something you have to have. And Dane's done a good job of pushing the right buttons to get where he needs to be."

Bossert's brain and work ethic play a crucial role on the team, according to his coaches and teammates.

"We run a lot of plays, and he has the ability to learn those, pick them up quickly," Jahnsen said. "He does a great job of helping the other guys out on the team."

It's what made Bossert a mainstay on Eagles athletic teams throughout high school, from football to basketball to track and field.

"It just helps you to make smart decisions," Bossert said. "You think analytically, you know 'this guy's hot on the other team' or this guy on your team is hot so you know to give them the ball...or how to stop them. You remember plays better. The coach expects that from you, and you help other people on the court with their plays."

"You know, just having someone around who can see it," Jahsen said. "Football-wise, being able to read schemes and see coverages, as a quarterback, that's by far one of the most difficult positions to play at any level. So I think he's really proven he can handle that."

Bossert said he's unsure about his future playing sports. He loves track and field the most, and he stressed patience in seeing how this spring plays out for him. He might want to study athletic performance in college - which would make sense, considering AP Biology is one of his favorite classes.

Likewise, Bossert's biology teacher is a fan of him. Eric Hayes praised his "very consistent" pupil, saying students like Bossert remind him of why he takes pride in his job.

"It's great to actually push the kids who I know can do fantastic," Hayes said. "Dane being at the top of his class, to kind of push him in that direction and him responding positively is really fun for me."

A sports fan himself, Hayes said the potential impact of a valedictorian-athlete combination would be reassuring to him.

"I think it just means great things for our school, it means you can be a student athlete in the right way," Hayes said "You can play your sport but also take your academics seriously. And he's a great role model for that as far as actually following through and taking that seriously."

If the school year were to end Tuesday, Bossert would just miss his goal, and likely end up the salutatorian. He might still have hope if some of his classmates earn A-'s instead of A's in their classes.

"I hope that I can just maintain my high grades and stay motivated," Bossert said. "You know, it's your senior year, you kind of lose motivation. So work hard in the classroom and hope that I can finish it strong."

With Southern Boone hosting the district tournament starting Tuesday evening, the Eagles similarly hope for a strong finish to their season.