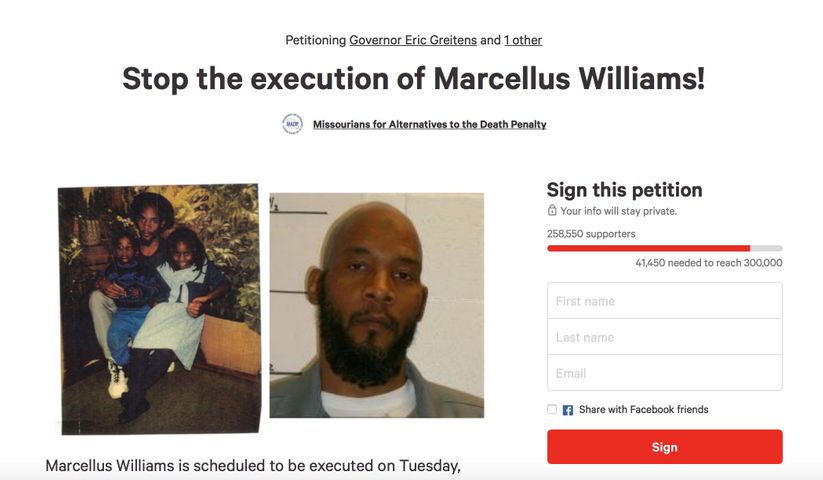 COLUMBIA - Social media users all over the country are celebrating after Gov. Eric Greitens granted a stay of execution for Marcellus Williams on Tuesday.
The case sparked a huge response from users on Twitter, Instagram, and Facebook. Some Instagram posts calling for Greitens to grant the stay got as many as 3,000 likes, hundreds of comments and almost 40,000 views.
Executive Director of the Midwest Innocence Project Tricia Bushnell said "Anytime you put something out that moves people and makes them feel something, it's going to resonate."
The Midwest Innocence Project is one of many groups that used social media to spread awareness about Williams' case.
Williams was convicted in the 1998 murder of Felicia Gayle, a reporter for the St. Louis Post-Dispatch, despite his claiming he was innocent.
New evidence shows Williams' DNA was not found on the murder weapon, but that evidence wasn't available when Williams went to trial in 2001, according to court documents.
Missourians for Alternatives to the Death Penalty started an online petition asking for 300,000 signatures in support of the stay. Although Gov. Greitens granted the stay before the petition could reach its goal, supporters are still signing it.
"I think the fact that posts from four days ago are still getting thousands of retweets tells us that people are paying attention more than we even knew," said Bushnell. "There are tons of tweets and posts out there but it's the ones about issues like this that speak to people that go viral."
Alison Brettschneider, a New York native, flew to St. Louis to support Marcellus Williams II, Marcellus' son. The two took to Instagram to post videos and pictures, asking for users to keep posting, commenting and calling for change.
Brettschneider brands herself as an inspirational leader and public figure. She said using social media did something that no other form of communication could do.
"We are in a time where people have followings of hundreds of thousands of people so why would you not use your platform to reach people," said Brettschneider.
Brettschneider plans to return to St. Louis when the new DNA evidence is introduced.
"I told Marcellus Williams Senior before I left that I would see him in court, so expect to see me there front row."
As for the case surrounding Williams, Gov. Greitens announced he was creating a five-person Board of Inquiry designed to look into cases like this.
The board will have subpoena power, and will eventually offer a recommendation to Gov. Greitens whether to grant Williams clemency.