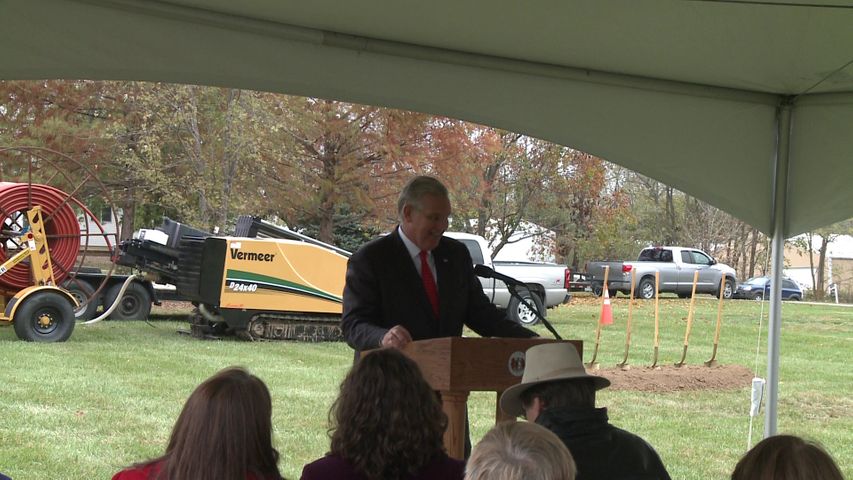 The groundbreaking ceremony marked the official start of the project, which is part of a larger initiative known as MoBroadbandNow. The initiative is an effort to expand broadband to rural areas of Missouri. Socket Telecom is building the fiber optic line which provide businesses, residents, health care facilities, and more with high speed Internet as well as local phone and video services. Funding the projectis one loan and one grant totalling $23.7 million from the U.S. Department of Agriculture as part of the 2009 American Recovery and Reinvestment Act.

Residents of Millersburg said they are looking forward to the high speed Internet since they have been using dial-up connections. Rita Adams, a member of the Millersburg Christian Church, said the faster Internet connection will help the church better connect with the community and be more efficient with its everyday tasks.

"When it would ice, there would be no reception or anything. So I know, me personally, it would be so nice just to be able to get on the computer and actually be able to do work. The frustration level is going to be so much improved," Adams said.

Adams compared the town's upgrade to high-speed Internet to generations who first received electricity in the town.

"You know, we've just been forced to have dial-up and everything if we wanted some Internet service. So, this is going to, I think, really level the playing field a lot more. As far as even like students trying to do their studies, doing research on the Internet, they were really hampered by living out in the community," she said.

Socket hopes to begin delivering the new services to the community sometime next year.