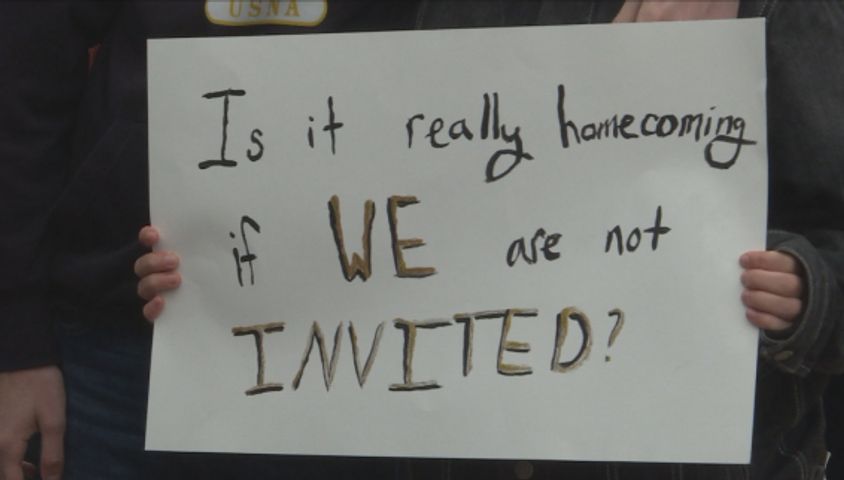 COLUMBIA - The Legion of Black Collegians and the FourFront Marginalized Student Council held a solidarity walk Friday to show support for students who are excluded from Homecoming traditions at MU.

The students marched from the Gaines Oldham Black Culture Center to the dedication ceremony of the Lucile Bluford Residence Hall.

The Solidarity Walk started in 2017 and the group said it's an effort to resist the injustices different groups feel.

“I noticed a common theme of exclusion from majority groups on campus," said organizer Autumn Carson.  "I would see everyone is super excited for Homecoming, but with marginalized students, it's just not the same experience."

Carson said the march is promoting positive change on campus.

LBC holds its own Homecoming events every year. It celebrates its 50th anniversary this year.

"LBC wanted to create something that embraced Black people and embraced our culture and celebrated us," Carson said.

LBC member Jordan Look said he helped plan the walk because he wanted to let all students know they are welcome on MU's campus.

"I wanted to show incoming freshmen that, although it’s been hard and maybe in high school they didn’t have many people who were like them, but they will be able to find that here at Mizzou," he said. "They’ll be able to find a support system and they won’t be alone."

In 2015, a protest during MU's Homecoming Parade sparked a series of events that led to several campus protests and a hunger strike by MU graduate student Jonathan Butler. The group, Concerned Student 1950, put forth a list of demands including the resignation of UM System President Tim Wolfe and MU Chancellor R. Bowen Loftin. Both Wolfe and Loftin eventually resigned.

In addition to the history of racial inequality at MU, a new study by the University of Southern California’s Race and Equity Center gave the university a “C” rating on overall equity on campus. MU received a score of 1.75 on a 4.0 scale, which is higher than Missouri’s average of 1.68.

"I believe that acknowledgement will allow the healing process to begin and will allow us to move forward in a more cooperative manner," said Look.