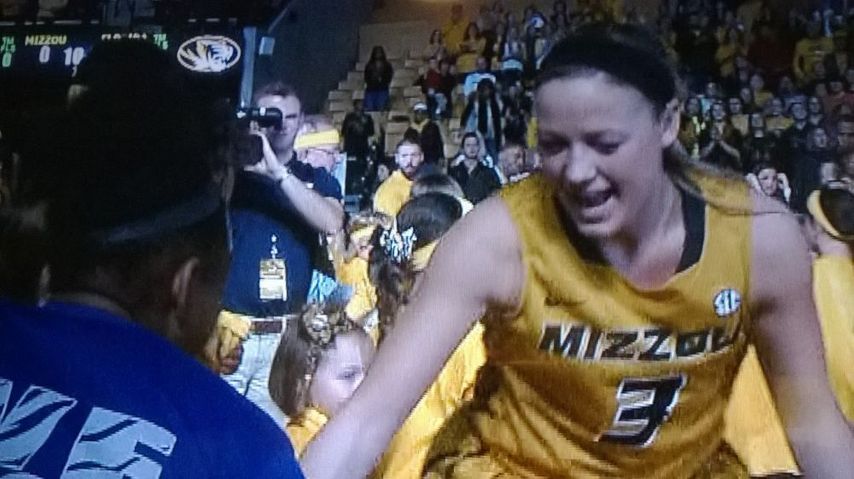 COLUMBIA- Sophie Cunningham is talking about the support her family has received from the community when she gets cut off by an orchestra playing. She breaks into a smile all too familiar to those who know her.

"One of most fearless, competitive people I've ever seen," Lindsey Cunningham, Sophie's sister, said. "While you might see the smile you can't let it fool you that's for sure."

"Sometimes that smile can fool you," Sophie said. "But if you're on the team, you know that it's not really a smile when you get out there on the court."

Sophie's play on the court is a major reason why the Tigers are headed to the women's NCAA tournament for the first time in 10 seasons. The former McDonald's All-American is averaging 13.9 points, 5.8 rebounds and 2.9 assists per game. She has been named SEC Freshman of the Week six times this season, the most ever for a freshman.

"Freshman year is challenging in the SEC and I think she's done a tremendous job with it," head coach Robin Pingeton said. "She's been a huge impact for us all year long."

Sophie leads the team in total points and is second in rebounds and assists, but the only statistic she cares about is in the wins and losses column.

"I'm just focused on getting the win for my team," Sophie said. "Whatever I can do for my team, that's what I'm going to focus on."

Winning seems like second nature for Sophie. She captured four consecutive state titles at Rock Bridge High School and won her first 15 games as a Tiger and her success has only increased expectations.

"She's got the highest expectations for herself, she's got goals that she's got set for herself," Lindsey said. "I think she's done a great job of taking in the experience, learning from every opportunity and really take this program to the next level."

As a highly touted recruit, Sophie had the chance to go to a top-tier women's basketball program. Instead, she chose Missouri.

"I grew up here in Columbia and my whole family has gone to Mizzou and played sports," Sophie said. "I could've gone anywhere, but I know my heart was here at Mizzou."

Despite having early success, including a record-setting 42 point game against Wake Forest, Sophie had her ups and down throughout SEC play. Sharing the court with her sister has helped her ease into the college game.

"It's a blast," Sophie said. "I have a whole bunch of sisters on the team, but when she's actually my sister it just makes it that much more special."

"I gotta believe that there's a calming factor there," Pingeton said. "Just someone to show you the ropes a little bit and guide you through the challenging times."

The Tigers finished the regular season 21-8 and when Selection Monday comes around March 14, they hope to end a 10-year NCAA tournament drought. Pingeton downplayed the importance of getting an NCAA tournament berth, but said she understands the competitive nature of the sport.

"Certainly if you're a competitor and you're playing at this level, its where everyone's trying to get to," Pingeton said. She emphasized the importance of Missouri controlling its own destiny.

"You don't want to leave anything to chance," Pingeton said. "You want to go into that selection show Monday with a great resume and control what you can control."

Lindsey said she thinks the goal of making an NCAA tournament has been in the back of everyone's mind since the end of last season.

"We try not to talk about it too much, try not to focus on the end result," Lindsey said. "At first we were just excited for post season play, but in the back of our minds the last couple years our goal is to make that NCAA tournament."

Sophie said a tournament berth is every team's goal at the beginning of the year and said she has no doubts about the team making a run in the "Big Dance" despite facing the best teams in the country.

"No one scares us," Sophie said with a smile on her face. "There are really good teams, awesome programs but I'm not scared."