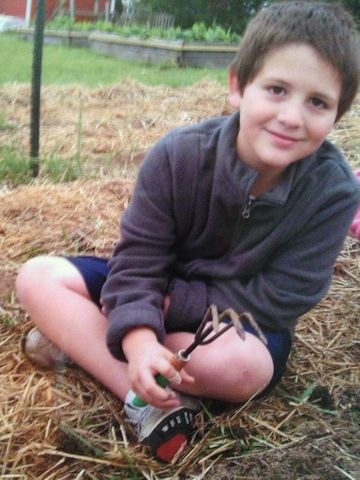 ASHLAND - A site for learning and after school programs has another purpose in the works: a memorial for a former student, eight-year-old Brayden Anderson. He was killed in the summer of 2012 at Lake of the Ozarks from faulty wiring on a boating dock.

Brayden was going into the third grade in Southern Boone County Elementary School. He worked in the garden for classwork and also in an after school gardening club. Naturally, the garden was a place for him to be remembered. "It is just nice to sit in a spot that they know Brayden loved and it's not his grave site," said Jennifer Grabner, co-founder of the Southern Boone Learning Garden.

Counselors worked with the students in Brayden's school to understand the loss and what his memorial would symbolize. "The things that he liked and his favorite colors and stuff like that. But they also wrote down words that made them think of Brayden," said Grabner.

Local Artist, Marni Jaime and school art teacher, Megan Cooper worked with the third graders to make tiles that symbolize memories of his favorite things. As part of the memorial, the benches will be adorned with the tiles and each of the benches will have one of the key words to remember Brayden. Some tiles already prepared include the words friendships, then love, and unity, added Grabner.

Jaime worked with the students to create 120 tiles and is also working on the words the children and counselors came up with. The benches will hold twelve tiles each and have one of the words Brayden is described with.

Grabner is happy with the success of the garden as an outdoor classroom and is proud that it has turned into more than that. "It's terrible, but a tremendous honor at the same time for the garden to be able to help them with that," said Grabner.