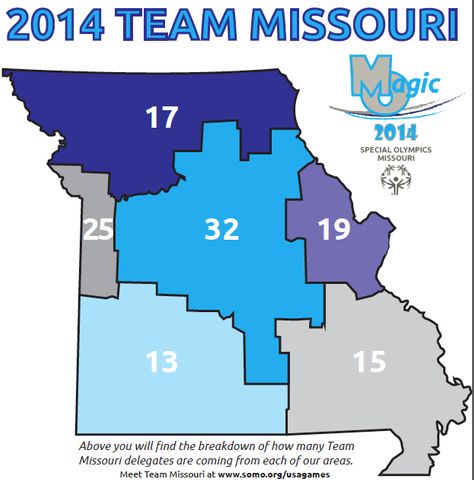 NEW JERSEY - Mid-Missouri sent 32 athletes to the 2014 Special Olympics USA Games this week in New Jersey. The games, held in several different venues across the state, began Monday and run until Saturday. In total, 78 Missouri athletes representing 36 different counties made it onto the roster. The team has already won 50 medals, and that number could increase. Nine athletes will compete Thursday, and one athlete will compete Friday.

The Missouri athletes trained for more than 250 days after initially being selected to compete on the roster. The team has 33 coaches and 10 different sports teams, including aquatics, basketball, bocce, bowling, flag football, golf, powerlifting, tennis, track & field and volleyball)

The Special Olympics USA Games run every four years dating back to its origin in 2006 when the games were held in Ames, Iowa. The closing ceremony for this year's games will be held Friday night.