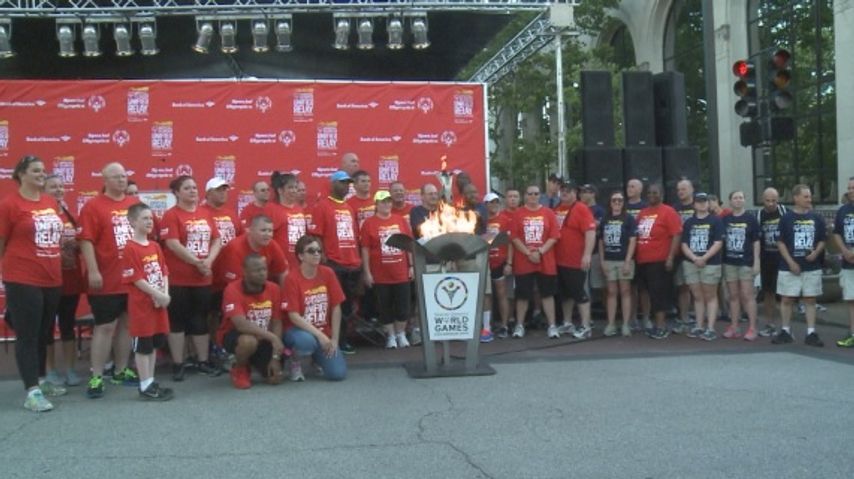 JEFFERSON CITY - A large, clapping crowd was on hand when a piece of Greece arrived at the capital on Thursday.

On its third day in the state, the Flame of Hope made its debut in Jefferson City. The flame was initially lit in Athens, the sight of the last Special Olympics World Games.

The torch was brought to the city by Missouri softball athletes Arthur Murphy and Allen Tobin, who will be representing Team USA in the games.

Gov. Nixon, who is an honorary coach for the games, was also at the celebration and congratulated all the athletes and residents who supported the organization.

Torch runners Edith Verslues and her brother Keith Lueckenhoff were excited to able to participate in this historic run.

"Keith is my brother and he loves to run with the torch so when I saw that it was coming through Jeff City, I went online and I checked it out and decided that we would run the torch together," Verslues said. "We've been to nationals but the world games, that it awesome."

Brandon Schatsiek, public relations manager for Special Olympics Missouri, said he is proud of the large turnout in the event and it goes to show how important the organization is in mid-Missouri.

"It shows the community that Special Olympics is a lot more than just sports for a lot of our athletes," Schatsiek said. "It's their daily life and what ever the community can do to kind of support those whether it is by raising funds or really kind of just coming out and meeting a couple of the athletes who are going to be competing in Los Angeles, representing their hometown, representing their state, the Show Me State and representing their country. I think people should take pride in that."

The torch has passed through 20 different routes in central Missouri with 150 different torch runners. This is the first time in Special Olympics history that the Torch Run was part of a nationwide event. More than 20,000 runners, walkers and cyclists are expected to take part in three simultaneous routes touching all 50 states in 46 days.

The trek takes participants from the East Coast all the way to California, where the Special Olympics World Games will be held from July 25 through Aug. 2.

Funds raised from the Unified Relay Across America go to Special Olympics to provide sports training, competition opportunities and additional programming for people with intellectual disabilities to become accepted and valued members of their communities.

Those interested in raising funds for the athletes who are going to the World Games can visit somo.org/worldgames