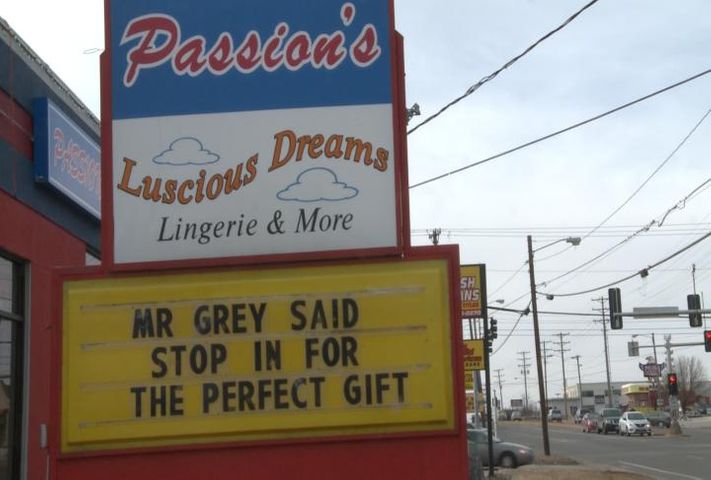 COLUMBIA - Valentine's Day usually brings in business for Passions on Business Loop 70, but this year there has been more traffic in the store than ever before.

The reason might be because of a book-turned-movie. The release of the "Fifty Shades of Grey" movie has prompted a whole new clientele to shop at Passions.

"We have a lot of people coming in for the first time," said Jimmy Roark-Gruender, a manager at Passions. "They come in talking about fifty shades of grey and then go and find all the other neat stuff we have."

Roark-Gruender said the way people look at Passions has changed.

"Because it makes it acceptable, it makes it mainstream, it makes the adult industry and the adult products we're selling where soccer moms are talking about it," Roark-Gruender said.

Retired psychology and sexuality professor Wayne Anderson said he has seen the way people think about sex evolve over his lifetime. In fact, he wrote a book about it called "The Changing Face of Sex."

"The big sexual change took place between '68 and '72, that was based on such things as birth control has become available, the Vietnam War had been going on, there had been that revolt, drug use had gone up, there were big things taking place in the homosexual community, big things happening in the women's movement, the world was changing drastically," Anderson said.

Anderson said he worries that work like "Fifty Shades of Grey" could be give people an inappropriate idea of sex.

"I think it may be giving them some unrealistic pictures about what sex can be or what sex is all about," Anderson said.

Still, Anderson is unsure what impact these works will have on the generation.

"I still have this old fashion idea that one should be married, and one should have children, and that's the way we continue the species," said Anderson. "It works out pretty well for some of us but with all of this contrary information, I'm just not sure where that's going."

The movie premiered in Columbia on Thursday at 8 p.m. and was sold out.