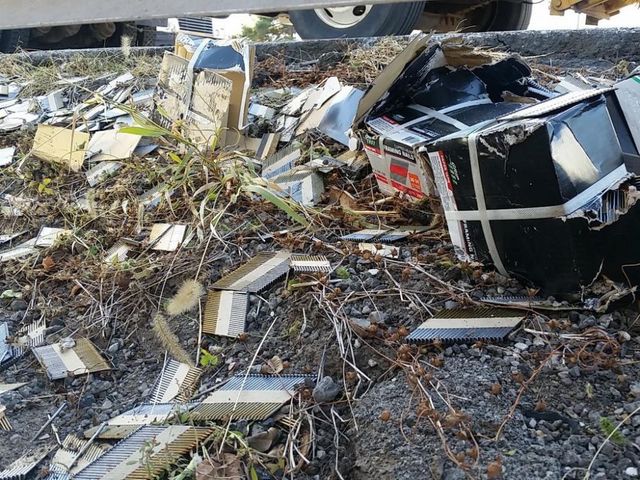 BOONE COUNTY - Multiple boxes of nails spilled on I-70, causing both westbound lanes of the highway to be closed Monday morning, leading to a miles-long backup. (See tweets with video and photos.)

Road crews and law enforcement closed the interstate between the 120 and 122 mile markers near the Midway exit west of the Columbia city limits.

MoDOT Central tweeted traffic was backed up past the 125 mile marker at 9:26 a.m. At 9:40 a.m., it tweeted that one westbound lane had been cleared and was open to traffic.

Facebook commenter Rachel Jenkins said she was stuck in traffic for more than an hour and a half because of the backup.

An officer with the Columbia Police Department told KOMU 8 News there were about 2000 nails per box and they guessed about 200 boxes spilled. The officer said police were still looking for the truck that spilled the nails.

Crews were cleaning up the nails as of Monday morning.

#I70ALERT: Westbound traffic remains stopped near mm 121 west of Columbia, due to spilled nails. Backed up to MM 125 pic.twitter.com/9L0QIv5mLA

The nails are almost cleared off the highway. @KOMUnews pic.twitter.com/osTHPB7Pfx

CPD told me there are about 2000 nails in a box and they guess about 200 boxes spilled. @KOMUnews pic.twitter.com/s7FmdzbXwa

(Editor's note: This story has been updated with the latest information.)