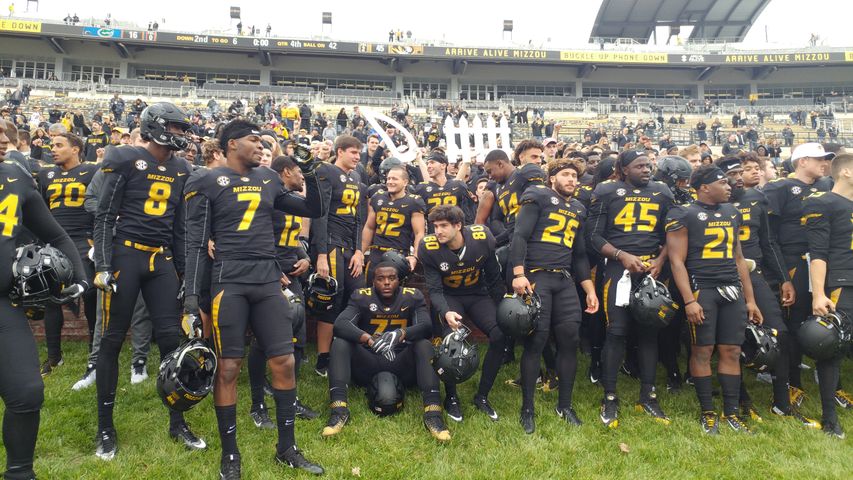 COLUMBIA- The Missouri Tigers defeated the Florida Gators 45-16 for their first conference victory of the year.

The victory extended the team’s season-high three-game winning streak. Mizzou also matched their highest margin of victory against a conference opponent since moving to the Southeastern Conference in 2012.

Mizzou’s defense played a critical role in the victory, allowing its second-lowest point total of the season and lowest in conference under head coach Barry Odom. The Tigers contained Florida to just three red zone drives, and only one resulted in a touchdown.

“You’re going to give up some yards in this league, so you got to make the opportunity for when they get down to the red zone,” Odom said. “You’ve got to get them into position where we’re forcing them to field goals.

Defensive back Anthony Sherrils stood among Mizzou’s top performers. The senior recovered a fumble off a punt that positioned the Tigers for the game’s opening touchdown.

Sherrils created another first-half turnover with his first interception of the season.

“The way [Florida’s tight end] went out quick with the quarterback throw, I locked on,” Sherrils said on his third career college interception. “He gave me a head-fake inside, and I knew he was going to the corner, so I just jumped it.”

Defensive lineman Terry Beckner Jr. added to the defensive surge with five tackles and the game’s only sack, his fourth in the last three games.

“I feel like that was a statement for our defense that we can get the job done,” linebacker Terez Hall said. “That’s the main focus, beating them every play at a time through all four quarters, every minute and every second.”

Hall led Mizzou with 11 tackles, but the team also combined for two defended passes and eight tackles for loss.

The offense was able to bounce off of the defensive efforts, scoring more than 40 points for the third straight game.

“When your defense is clicking, it gives your offense energy,” wide receiver J’Mon Moore said. “It gives you a better feeling about coming out on the field, it builds momentum, and that momentum helps big plays happen.”

Mizzou improves to 4-5 on the season, moving ahead of Tennessee and Vanderbilt in the SEC East standings. With two more victories, the Tigers would be guaranteed their first bowl game since 2014.

“We’ve got something going on right now that we have to take one day at a time,” Odom said. “I’m proud of the effort, and it was a step in the right direction no doubt.”

Up next, the Tigers host the Tennessee Volunteers for their home finale on November 11 at 6:30 p.m. Mizzou finishes the 2017 regular season with a pair of road matchups against conference foes Vanderbilt and Arkansas.