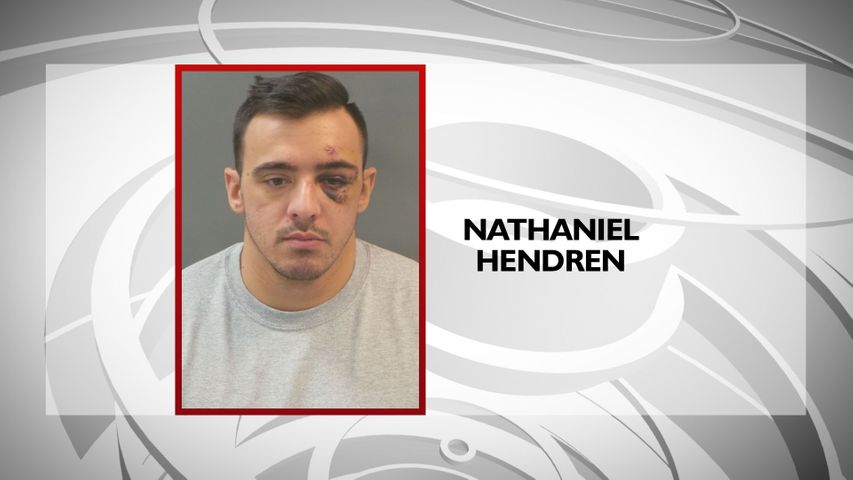 ST. LOUIS (AP) — A St. Louis police officer accused of playing a deadly variation of Russian roulette that killed a female colleague was freed on bail Thursday, but with stipulations that keep him homebound and without access to firearms.

Officer Nathaniel Hendren, 29, is charged with involuntary manslaughter and armed criminal action in the death of 24-year-old Officer Katlyn Alix.

Hendren was freed from jail shortly after a hearing in which a judge agreed to a change that required Hendren to post only $10,000. He was originally held on $50,000 bond. Hendren, shackled at the arms and legs and surrounded by deputies for protection, sat with his head bowed during much of the court hearing. He did not speak.

Hayden, speaking at a news conference, raised his voice and pounded his fist in responding to a letter Monday from Circuit Attorney Kim Gardner. In it, she questioned whether police tried to block drug and alcohol testing of two male officers after the shooting, and said police were too quick to initially characterize it as an accident.

Prosecutors allege that Hendren and a male colleague were on duty in the early hours of Jan. 24, but went to one of the officers' apartment for a reason that has not been explained. Alix, who was off-duty, met them there.

Hayden spoke publicly about the shooting for the first time since immediately after Alix's death. He declined to address details of the shooting, saying he didn't want to jeopardize the investigation or the prosecution.

Hayden said his initial phrasing of the shooting as an accident wasn't meant to imply conclusions had been drawn.

"I later learned that the circumstances surrounding the shooting were much more reckless and dangerous than what I originally understood," he said.

He was particularly angered by Gardner's accusation that officers tried to obstruct drug and alcohol testing of the male officers, calling the claim "unwarranted, certainly untimely and absolutely irresponsible."

Gardner responded in a statement that stood by her concerns.

"It is time to focus our efforts on working together to seek the truth of this matter, so we can get justice for Katlyn Alix and the community," Gardner said.

Gardner and Hayden have had a testy relationship for several months. Last year, she developed an "exclusion list" of 28 officers who won't be permitted as primary witnesses in criminal cases. She has cited credibility concerns but hasn't said specifically what prompted the list.

After Alix's death, Gardner immediately enlisted the Missouri State Highway Patrol to perform an investigation simultaneous to the police investigation. A day later, Hendren was charged.

And on Wednesday, Gardner charged two officers in the shooting of a bar patron that occurred in April. Police had sought charges against the patron in May, but Gardner declined.

Many questions remain unanswered in Alix's death. Why were the on-duty officers at the apartment? How did Hendren get the black eye he's pictured with in his mug shot? How could two military veterans with vast firearms training allegedly be so careless with a gun?

That last question clearly perplexed Circuit Judge David Roither. At Hendren's bond hearing, the judge noted that he is an avid hunter who often teaches others about the sport.

"You do not point a muzzle at anything you don't intend to shoot," Roither said.

Hendren's attorney, Talmage E. Newton IV, said after the hearing that people shouldn't make judgments until all of the facts are out. He declined to elaborate.

Newton cited Hendren's four years as a Marine who served in Afghanistan, as well as his 14 months with the police department as evidence of his character. He told the judge Hendren had virtually no savings and could not possibly scrape together $50,000 for bail.

Roither instead raised bail to $100,000 but agreed to let Hendren be freed if he posts 10 percent, or $10,000. But Roither added stipulations: Hendren will be on house arrest and must turn over all guns and his passport.

The judge also heard emotional statements from Alix's husband, Anthony Meyer, and her sister, Jessica Durbin. Meyer spoke so softly it wasn't audible to the large crowd in the courtroom, which included several relatives of both Alix and Hendren as well as police officers.

Durbin said she lost her best friend. "There is a huge hole in my heart," she said.