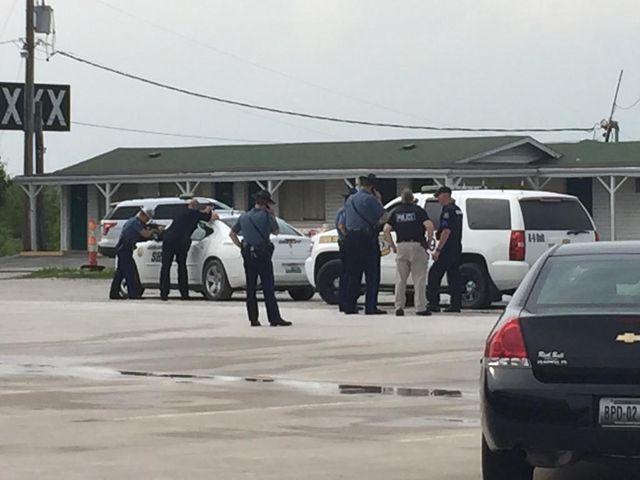 BOONVILLE - A standoff at the QT Inn in Boonville Friday ended with no one in the motel room according to the Missouri State Highway Patrol.

Around 10 p.m., Officials said they thought the person in the motel room would be Carl Roettgen. Roettgen shot at a police officer Wednesday at the Walmart in Marshall. He is still on the run and should be considered highly dangerous.

Because Roettgen was suspected to be in the room, SWAT team members used a robotic device to search the motel room before officials entered.

UPDATE: Boonville standoff situation has ended without incident. Suspect Carl Roettgen was not in the motel room as officials first thought.

RT @JasmineDell @KOMUnews Two days ago Roettgen put a gun to an officer's head and pulled the trigger but the gun did not fire.

Multiple law enforcement agencies were at the scene of a standoff with a possible suspect at the QT Inn in Boonville Friday afternoon. Officers from Boonville police, the Cooper County Sheriff's Department and the Missouri State Highway Patrol were standing behind vehicles with guns drawn.

A Missouri State Highway Patrol helicopter was overhead. The agency would not identify the suspect inside or what that person was wanted for. Officers began escorting motel guests to their cars near 6 p.m. One guest told KOMU 8 News officers had come into his room to get a better layout of the scene.

More law enforcement was arriving on scene at the same time, some wearing heavy gear.

@KOMUnews More armed officers are arriving at the scene. They are wearing vests and helmets. pic.twitter.com/5Eb3xIHVUu

Late Friday afternoon, law enforcement expanded the area they had blocked off, stringing more crime tape around the scene.

A KOMU 8 News reporter at the scene said at least eleven first responder vehicles were at the scene at 253 Route B in Boonville.

RT @JasmineDell Boonville Police say they are looking for someone who is considered dangerous. pic.twitter.com/FAtvdACQT2