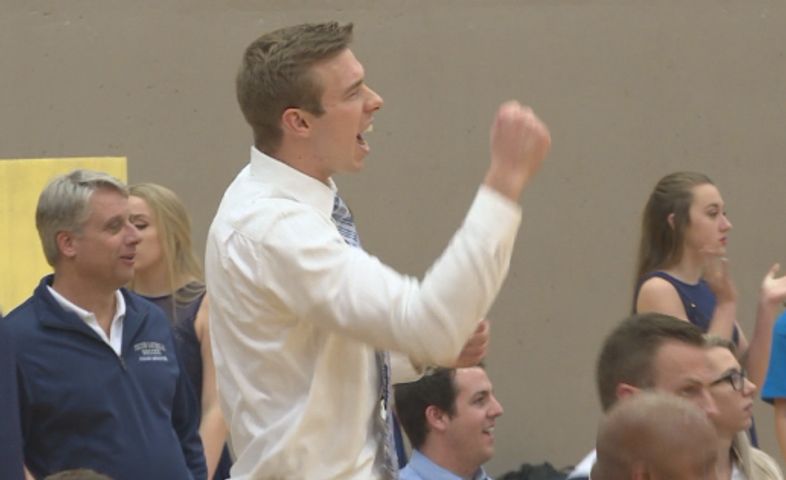 COLUMBIA - One Columbia College star basketball player found his way back to his passion to coach for the Tolton Trail Blazers.

Forward Zach Rockers traded in that title for "Coach Zach Rockers," as an assistant for the boy's basketball team.

Rockers is a theology teacher in his first year at Tolton, and he said he tries to use faith to help others.

"It's a dream come true to be able to follow my faith and help teach people skills they can use on and off the court," Rockers said.

Tolton Boy's Basketball Coach Jeremy Osborne said, "He's the kind of guy you want to be around, and I think that speaks more than just being a good coach."

Tolton Senior Guard Isaiah Wilson said, "He knows how the game is to be played. He knows what we are thinking, so it's really good. We can relate to him a lot."

Rockers was a star for the Cougars in college as that team won four conference titles in five seasons. Rockers also scored 1,214 career points, 13th of all-time for the Cougars.

The Missouri ties don't stop there. He previously played for and went to Helias High School. And his parents both teach in Missouri.

"I feel like in a way that's a gift to have that knowledge and try to use those to the fullest and share those with kids," Rockers said.

On the court, his players and former teammates say, he always plays with the same fire from start to finish.

Columbia College Men's Basketball Coach Bob Burchard said, "He is a competitor a really good competitor. He'll knock you down, but then he'll help you back up."

Osborne said Rockers played a big role in rebuilding the Trail Blazers after the loss of a few key players.

"He just sees the game really well. I'd say his knowledge is one of the big things and how much he knows the game," Osborne said.

After a tough start with losses early in the year, the Trail Blazers and Rockers rebounded with key wins against cross-town rivals Battle and Jefferson City in February. Wilson combined for 56 points in the two games, and he said he credits Rockers for a lot of his growth.

"He's helped us all a whole lot. I think just talking with him, and he's helped me grow off the court too like when he was my teacher," Wilson said.

Rockers said he plans to teach and coach for as long as he can.