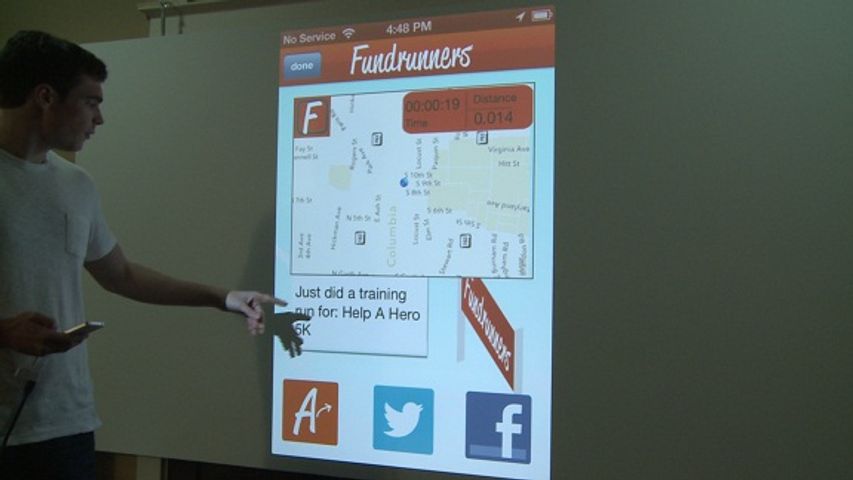 COLUMBIA- Jamie Canine and Jake Shaefer are known around Columbia as the owners of the Add Sheet. But the new company they developed in September at Startup Weekend with other entrepreneurs ended up winning first place out of 22 other companies formed at the contest. They call it Fundrunners.

In the company's own words, Fundrunners will be a digital toolset that will allow people to connect through social media and spread awareness about their particular fundraisers. It will also allow organizers and participants alike to donate and raise money for their causes. The company's app currently in development will even allow particpants in fundraiser runs to track their individual runs and post them to social media outlets.

Jamie Canine said that the idea came to him when he attended a running event for charity.

"I guess you could say I was the guy that conceived the idea. I participated in a running event a few years ago and saw the need for people to be able to raise money a little bit easier and be able to tell their friends about causes that they were raising money for," Canine said.

Canine also said that the company doesn't plan on being restricted to just Columbia, with plans for its services to be used internationally.

"We want to encourage anybody that wants to do something good for other people that they know or care about... we want to empower them to take action and raise money to benefit those causes. It's really not constrained to any geography or any particular location at all," said Canine.

Columbia League of Innovators Director Heidi Fuhrman told KOMU 8 News that she joined the league to build companies from the ground-up in events like Startup Weekend. Startup Weekend is sponsored by the league.

"I think its really exciting. And its fun to be able to help some of the entrepreneurs. They have such a drive and so much excitement about their idea and about their business. I just try to build a community that is supporting start-ups," Fuhrman said.

"We are trying really hard to empower not just the individual or a couple people that want to make a difference, but also large organizations that already have a process in action to raise money for causes to use the software. So, its scalable," Canine said.

Fundrunners' website and app are still in development, but the team hopes to have their first service test on December 8th of this year.

Other winners of Startup Weekend include the companies Trackly in 2nd place and OneCDS in 3rd.

To learn more about Fundrunners, visit their Facebook page here.