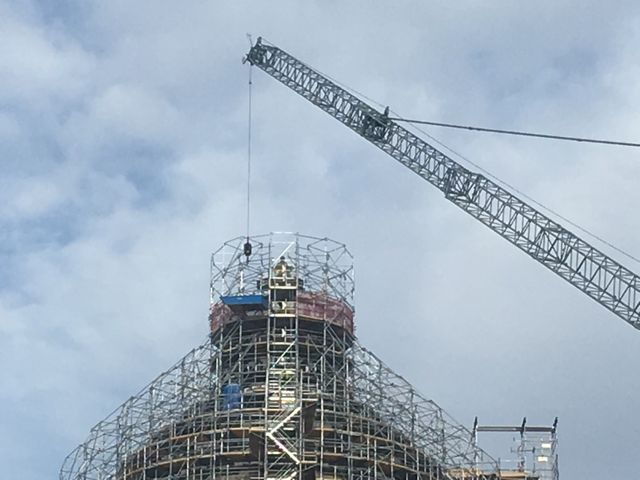 JEFFERSON CITY - Ceres, the bronze statue that sits on top of the Capitol Building, will come to ground level for the first time in nearly a century on Thursday.

Crews will remove the statue for conservation and scheduled cleaning, according to the Missouri Office of Administration.

This will mark Ceres' first time off the Capitol dome since she was installed on October 29, 1924. Ceres weighs about 1,500-2,000 pounds and her largest part weighs 900 pounds; she stands 10 feet, four inches tall.

A 550-ton crane will remove Ceres from her perch and put her on a flatbed. She will then be on display for a public viewing for about two hours immediately following the removal in the media parking lot, which is located between the south lawn and High Street. No one will be allowed to touch Ceres at the viewing.

"For the entirety of many of our lives, we have admired Ceres from a great distance," said Office Administration Commissioner Sarah Steelman on the Office of Administration's website. "This month, we will have the rare opportunity to view her up close to appreciate her beauty and magnificence."

The cleaning and conservation Ceres will undergo is very necessary.

"Ceres has been on top of the Missouri State Capitol building since she was installed in 1924," said Brittany Ruess, a PR specialist at the Missouri Office of Administration. "She is in need of cleaning and cionservation to ensure she remains intact for many more years to come; we also need to repair the base of Ceres that connects her to the Capitol. The base has deteriorated over time."

The last time Ceres underwent conservation was 1995; a crew tended to her on top of the dome to prevent further deterioration to the metal, which is referred to as "bronze rot."

After the public viewing, Ceres will be taken to the Conservation of Sculpture and Objects Studio, Inc. for cleaning and conservation; this is expected to take about one year.

"It will take about a year to repair the Capitol dome and within that time, repairs to her base as well as her cleaning and conservation will be completed," Ruess said.