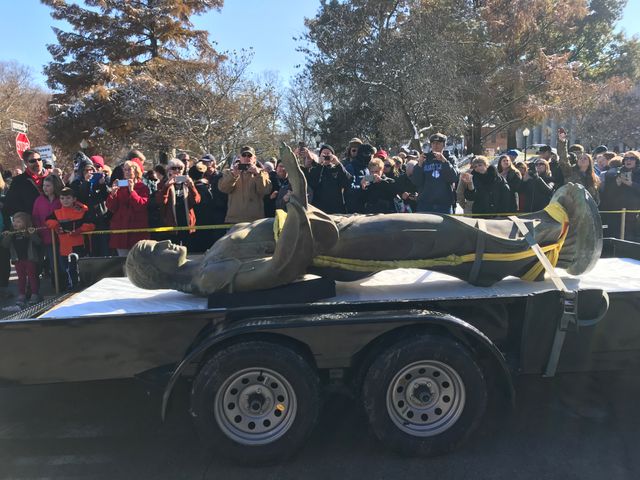 JEFFERSON CITY - Ceres, the statue that stood on top of the State Capitol for 94 years, touched ground Thursday.

The statue was brought down for conservation and cleaning.

"It's a non-abrasive system, there will be much waxing of the statue, and when she comes back she will look really beautiful again," said Cathy Brown, Missouri Office of Administration and Facilities Management, Design and Construction Staff director.

The process started around 7:30 a.m., and took nearly five hours to bring Ceres to the ground.

"The process of removing Ceres was very intricate, took a lot of time," she said."This isn't something you just go up and wrap some straps around a statue and remove her."

In ancient Roman religion, Ceres is the goddess of agriculture, grain crops, fertility, and motherly relationships. Lt. Governor Mike Kehoe said she was a perfect fit for the capitol building.

"Missouri is an agrarian state, it's still our number one industry today and it was 94 years ago, so it's appropriate that we have a reference to our agricultural roots and background on top of our state's capitol," he said.

The statue didn't come down without a scratch, though. Kehoe said the statue has definitely been struck by lightening, but he isn't sure how many times.

Brown said there was a hole where Ceres stood, but contractors patched it up after the statue came down.

"It's not a huge hole whatsoever, and we'll cover that to protect any weather penetrating that area," she said.

The statue is expected to be back on the building in about a year. Kehoe said Ceres' twitter will have updates throughout the conservation and cleaning process.