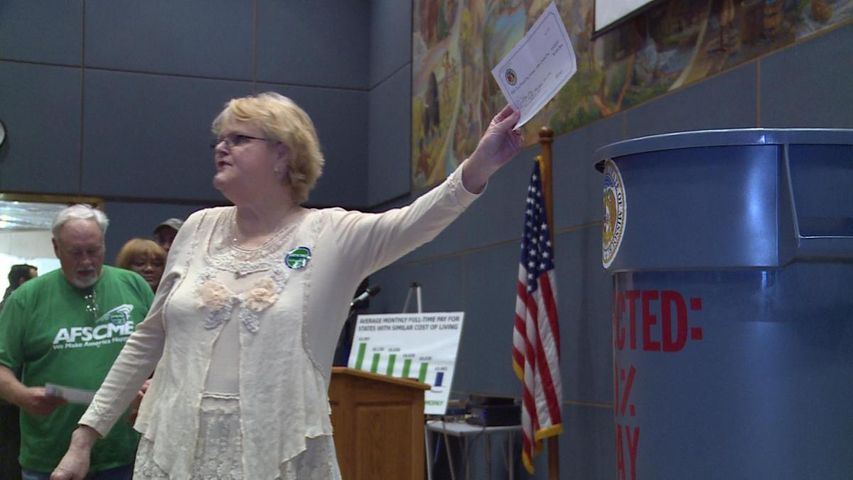 Attendees threw symbolic pay-raise vouchers into a trash can to show their rejection of the zero percent pay increase for state workers in the 2016 budget just passed by the Missouri legislature.

Wendy Battaglia works as a certified nursing assistant at a veteran's home. She said, with her current salary, she can't make ends meet.

"As a single mom, I am trying to take care of my three girls as best I can," she said. "But that is almost impossible to do when there is such a disconnect between your paycheck and the local cost of living."

The American Federation of State, County and Municipal Employees said while Missouri ranks 50th in terms of state government worker pay, Missouri has the 34th most expensive state cost of living.

Battaglia said she just doesn't see how that adds up.

"With the way my salary currently stands, I never know if I might need to take out a payday loan," she said. "That's why myself and so many others are here asking today for legislators to support a five-year plan to raise Missouri's state workers' wages to meet the cost of living in Missouri."

State Rep. Jon Carpenter (D) said he is in favor of the plan.

"In the private sector, this would never stand," he said. "Why should the state operate any differently?"

Battaglia said in the past 7 years, she has received a total raise of $1.10.

Juma Jones said he wants legislators to understand the personal struggle that comes  with low wages.

"I work three jobs, I never see my kids," he said. "I do not want my kids to have to raise themselves. Most of us here work hard to take care of veterans, the sick, or mentally ill, people who need help. But we need help too, so we can help our own families."

After the symbolic tossing of pay-raise vouchers, protesters from across the state dispersed to speak to senators and representatives.

Missouri pays its employees an average monthly salary of $3,322 per month, or just less than $40,000 annually, according to the Bureau of Labor Statistics. On average, that's about $2300 less than states neighboring Missouri.