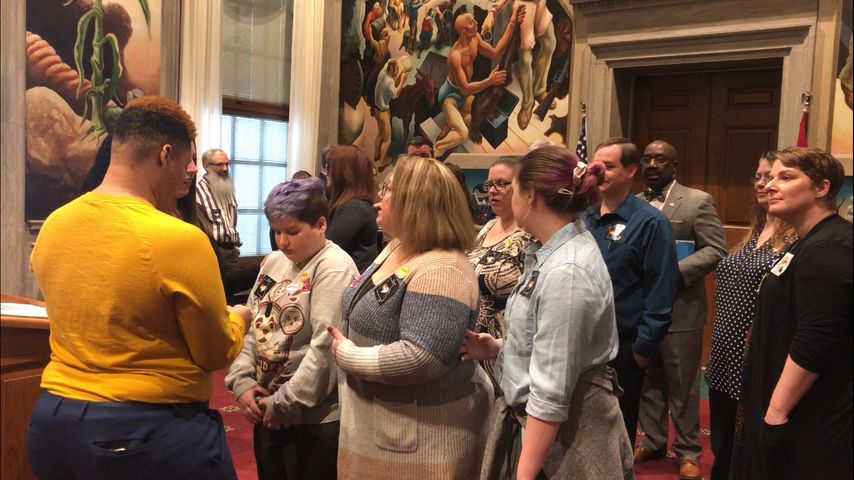 JEFFERSON CITY - This week state lawmakers are focusing and fighting on bills about the inclusion of the LGTBQ community.

House Bill 1527 grants rights to gay and transgender people. As of right now, they can be legally fired from their jobs due to their sexual orientation. House Representative Greg Razer believes this is an issue that's already affecting people in Missouri.

"The St. Louis County Police Department just had a police officer who was denied promotions because he was gay," Rep. Razer said. "Somebody who is protecting our communities and our homes, who is doing their job, doing it better than others, who is deserving of a promotion but can't get one because he's a gay man. That's where we are in Missouri today."

Rep. Razer said there are 15 bills he calls "anti-gay". Razer said 10 out of the 15 of those bills have been referred to a committee. Yet, the three bills in favor of LGBTQ rights, are still sitting on the Speaker's desk.

Chuck Basye supports House Joint Resolution 82, which requires students to play in gender-specific sports with the gender they were assigned to at birth.

"It's not designed to be hateful," Rep. Basye said. "In my opinion it's kind of common sense."

"I have a granddaughter that plays softball and works very hard," Basye said. "I just think it's something that we need to do because it's a problem in other states."

Basye sponsors House Bill 1565 parental rights, a parent should have the ability to opt their student in or out of sexuality instruction if they don't agree with a particular subject. Basye wants to emphasize that HB 1565 is not anti-gay.

"There's already a sign on the Business Loop (in Columbia) that labels me as a homophobe," Basye said. "This is exactly why people don't want to speak out because they don't want to be labeled."

Razer's bill has not been signed to a committee yet. Basye's bill has been referred to the Elementary and Secondary Education committee.