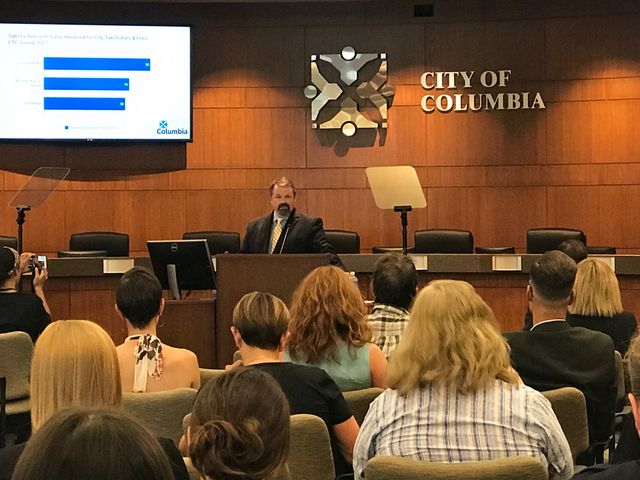 COLUMBIA – City Manager Mike Matthes presented the 2018 State of the City address Friday. A theme of the address was satisfaction with city services on a shrinking budget.

Columbia's sales tax is average for Missouri, but with increased internet buying the sales tax revenue isn’t cutting it.

“Our strategy for decades has been to rely on sales tax, and how fast our city grows, to keep our property tax rate to the minimum,” Matthes said. “That strategy is no longer capable of moving us forward, or even keeping pace with the needs of the community.”

Matthes will be presenting budget recommendations to the city council in the next couple months.

“Our staff is setting the bar for high quality service,” Matthes said. “They provide this high level of service with significantly less property tax revenue than their counterparts receive in other cities.”

Jay Hasheider, who was present at the address, said he knows property taxes in Columbia are low but an increase seemed to be the main fix to the lack of funding issue.

“I would like to make sure that there isn’t anything else that we could be developing some revenue from besides increased property tax,” Hasheider said.

The satisfaction with the value received for city tax dollars and fees is also higher in Columbia than the U.S. average.

More positive subjects focused on in the address include the drop in the unemployment rate for African-Americans in Columbia over the last 5 years, the success of the Community Scholars program at Hickman High School, construction of a new police station and fire department and high satisfaction with the city water service.

Some negative aspects of the address turned the focus to the decreasing satisfaction with police efforts to prevent crime in Columbia and finding another way to fund the city government other than a heavy reliance on sales tax.

Only 47 percent of people surveyed are satisfied with police efforts to prevent crime in Columbia, which is down from last year.

“As we look toward the future there are 3 priorities facing us in the coming year which will need particular attention,” Matthes said. “The need for a drinking water ballot is one, the need for expansion in fire and police services and the need for the city to diversify its revenue base away from our current reliance on sales tax are critical.”

Missouri River Regional Library brings back a traveling library for the community
JEFFERSON CITY - The Missouri River Regional Library's 'Bookmobile' is back on the road delivering books after not running for... More >>
31 minutes ago Tuesday, July 14 2020 Jul 14, 2020 Tuesday, July 14, 2020 5:51:00 AM CDT July 14, 2020 in Top Stories
Share:
Email
Facebook
Twitter