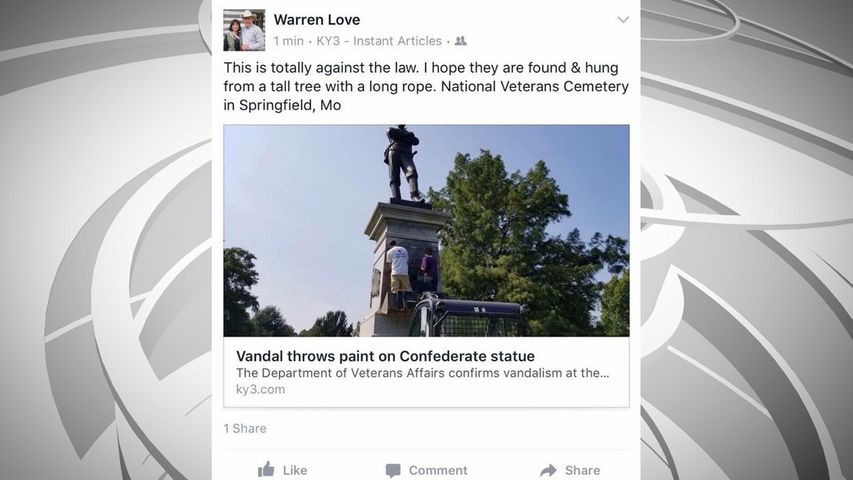 JEFFERSON CITY - State Rep. Warren Love apologized Thursday for an "extremely poor choice of words," which some lawmakers have equated to a call for lynching. But Love told the Associated Press he isn't planning to resign.

Love, (R, Osceola), posted on Facebook Wednesday that he hopes whoever vandalized a Confederate monument in southwestern Missouri is "hung from a tall tree with a long rope."

In a statement Thursday, Love said, "I apologize for using offensive and inappropriate language to convey these thoughts and ask for the forgiveness of my colleagues, constituents, and all Missourians."

Leaders in MO need to do better & I don't think the Sen or Rep should be representing the people of MO; both should face same consequences.

U.S. Sen. Claire McCaskill called for Love's resignation in a statement Thursday, and said his comments were "unacceptable."

In a phone interview with KOMU Wednesday, Love said he was only trying to make his feelings clear in his post.

"It appears that several people have interpreted a post I made about vandalizing an object of remembrance in a national veterans cemetery in Springfield to be rather harsh and inciting violence," Love said. "I did not mean it that way and was only using an old cowboy statement that is a Western custom for thieves that steal cattle and horses."

In his statement Thursday, Love said he does not "support violence or hateful acts" toward the vandals.

Columbia businesses don't have to refuse service to unmasked customers
COLUMBIA—About 20 people filed complaints about other individuals or businesses not following the mask ordinance this weekend, according to the... More >>
49 minutes ago Monday, July 13 2020 Jul 13, 2020 Monday, July 13, 2020 7:19:00 PM CDT July 13, 2020 in News
Share:
Email
Facebook
Twitter